When talking about bullying, it is very important for parents (and teachers and kids) to understand what is not bullying. Many times, a single act or behavior is out of proportion, but it is not considered bullying.

Some people think that bullying is any aggressive behavior and although such behaviors are a source of concern and need attention, it is important to separate them from bullying. As I said in the first chapter of the bullying series, bullying is recurring and deliberate abuse of power.

It is not easy for kids to understand the difference between a deliberate act and an accidental one, but it surprises me that many grownups also talk about things people do to them as if they were done intentionally to hurt them.

Such perception is very dangerous, because every minor act of conflict, done without any intention to harm, can escalate and become a big conflict.

Much like in any communication, whether it is verbal or not, there are two sides involved. Bullying is a form of communication and depends not only on the giver but also on the receiver. 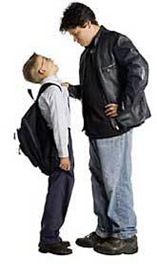 For an incident to be considered bullying, the aggressor must want to hurt someone and the victim must perceive the incident as a deliberate act of abuse.

This incidents on this list are NOT considered bullying:

All the behaviors above are unpleasant and need to be addressed, but they are not to be treated as bullying. Many times, labeling a single act of aggression can turn it into bullying just by perceiving it that way.

Until next time, happy parenting,
Ronit