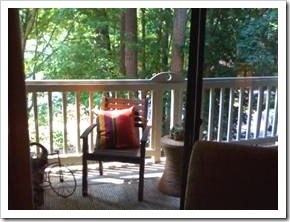 I see most of my clients on my beautiful deck (porch) overlooking my lovely back yard. It offers lots of space, a great view of palm trees, our papaya tree, some nice houses and the hills on the horizon. The door to our house is made of glass and the yard is fully fenced, so when we sit on the deck, we have a full privacy, apart from the birds, the butterflies and the frogs all around us.

The walls of my deck have heard many stories. Some have been sad and heartbreaking stories of loss and abuse, while others have been inspiring and wonderful stories of victory, success and personal growth.

I have heard from other coaches that when you have many clients, you start confusing them, so I made an effort to write notes on all my clients’ files to remember what happened to each of them. After they go, I sit down and reflect about the session, writing wonderful stories of achievement and failure, heartache and triumph. Anyone who ever reads my notes will never know what the story is about, because I write in a different language and I have codes of writing that no one else understands. So it is only me, the walls of my deck, the flowers on my table and some nosy birds or butterflies that hold those stories.

For a while, I have been thinking about this. What a shame! Do you know how many times I hear these stories that say to myself, “I wish everyone could hear it”? Sometimes, I hear shocking things and I think, “I’m fortunate, because people go through much tougher things than me in their life”. I have enough material for thousands of stories, and I mean real life stories, although some clients’ stories are so unreal they sound like fiction.

I hope you enjoy and benefit from this series.

How to help your kid drive 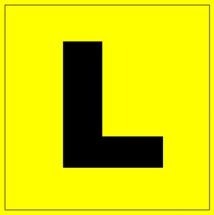 I have only met Joanna twice so far. All she wanted was to be a good mother for her three kids, but she found it challenging, thinking she was a bad role model for them. Joanna was insecure due to a long history of neglect and thought she was worthless. She was underpaid in her job, but never protested, because she needed the job. When people treated her badly, she blamed herself and immediately thought something was wrong with her.

In our first session, we talked about who she was and what she wanted from life. She was very clear about being a good mother and her desire to support her kids. When I asked what she meant, she said she was doing her best, but it was obviously not working, because her kids were not happy and neither was she.

This week, I met Joanne again. We sat on the deck and I asked her about her week.

“I had a tough week, but something wonderful happened to me”, she said, very happy and proud of herself. I could swear she was holding her body differently too.

“What happened?” I asked with excitement. I love stories, especially the wonderful kind.

“My son Jack went to get his Learner’s (in Australia, new drivers must pass a written test and get a Learner’s License, after which they can practice driving with their parents with a yellow ‘L’ sign on the car). When he failed his first test, I told him he would have to pay for the next one with his own money and that he should study harder. He studied, paid for the second one and failed again. I was very upset. It was his money and he doesn’t have much money, so I told him he probably didn’t study enough. I took him to his third test and he failed again. He failed 5 times! You should have seen him. He was devastated and I kept saying ‘You just have to study harder’.

Well, this week, I went with him to his 6th test. He failed again, but as we were about to leave the licensing office, I remembered you told me that auditory kids performed better verbally, so I told my son I would go to the counter and ask them if they would read him the test. My son got upset and said, ‘No, mom, don’t go. I’ll study harder for next time”. Well, I had never in my life done anything like that, but I remembered your words and did it anyway. Surprisingly, the man at the counter smiled and said, ‘Of course’. He took my son aside and read the test out to him. 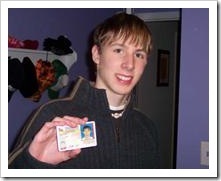 Jack scored 100%! Can you believe it? He cried and I cried. He thanked me over and over again and I was so proud of myself. On the way home, he asked if I would pay for that last test and I said ‘Yes’. I figured I needed to pay for telling him to study harder when he knew everything so well already”.

She was teary even when she told me this story and I cried with her.

Jack is 17 years old. Can you imagine how much heartache, frustration and negative self image his mom could have prevented from him if she knew he was auditory when he was 5 years old?

Beliefs can cause all our problems in life. Luckily for us, beliefs are also the most powerful weapon we have against them. It just depends what kind of beliefs we have. For the most part, beliefs are created in our minds without our consent. Most of the beliefs you have…