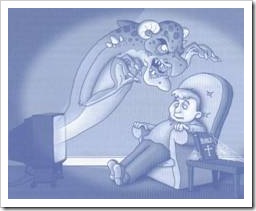 Last month, I ran a workshop for non-profit organizations about the work we do at Together for Humanity. In the workshop, I gave participants statistics about kids’ attitude to different cultures. Together for Humanity has worked around Australia with 50,000 kids from grades 4 to 12 and collected the information about their attitude in a survey. What do you know? Kids are racist! Very racist!

Regardless of age, most of the surveys showed bad attitude towards Muslims. When we asked the kids if they had ever actually met a Muslim person, most of them answered “NO”.

In their survey, kids answered that Muslims were not friendly, they were scary, they did not care for others, they did not have good morals or respect for women, they were unkind and arrogant and they were dangerous and racist – all without ever meeting a single Muslim person. What do you think about that?

Where did those kids get their negative impression of Muslims? I say they got it from watching too much TV.

In the workshop, I asked the representatives of the organizations to tell me what they thought about our survey results and they all said, “They get it from the media”.

Time and time again, when I ask parents about the things they fight with their kids over, too much TV always features on the list. I know it scares me that my kids watch too much TV, so I think it is a good idea to put some order into the TV topic.

Now that you have read these statistics, you have two options: You can deny it and say it is impossible or you can get really scared!

The main reason people are concerned about the influence of TV on kids is that kids do not have many filters and it is easy for them to misinterpret what they see on TV.

The influence of TV is not limited to kids. Grownups are also influenced, because without this, advertising companies would not be making so much money. Just see how well drugs are selling because of TV advertising.

People watch TV for many reasons. I remember the first days of TV in our house when it was pure entertainment. It was a wonderful way to see the world and to learn new things. It was also a cheap replacement for going to the movies, because movies were so expensive we only watched 3-4 a year. So TV is not all bad. I can think of at least 10 very good reasons to watch TV:

You are probably asking yourself, “If you think TV is so good, why are you so worried about it?”

Join me next week for the other side of TV and the reason TV brings up concerns for parents.

Until then, have a great week!
Ronit