The choice theory, founded by William Glasser, suggests that all our actions are chosen and driven by the five basic needs: survival, love and belonging, power, freedom, and fun.

In relationships, our need for love and belonging is the most important one. Based on Glasser, satisfying this specific need will guarantee our ability to fulfill all other needs. The source of all problems in the world, according to the choice theory, is disconnection. Behavior problems, mental illnesses, violence, abuse, crime, school problems, marriage breakdown, relationship challenges, and depression are all a result of our inability to connect or feel love and have a sense of belonging.

Our relationship with those we care about and care for us depends on our caring ability. Glasser suggested that there are 7 deadly habits that needed to be replaced with 7 caring habits.

In the Be Happy in LIFE coaching program, kindness is the ultimate caring act and it replaces fear, which we believe is the ultimate reason for pain and suffering. All the good things we do are an act of love and we show it by kindness. All the “bad” things we do, we do out of fear.

Based on the choice theory, there are 7 things we do that cause a relationship breakdown. This is true in all relationships–whether it is with parents, kids, husbands, friends, lovers, siblings, work colleagues, acquaintances, bosses, managers, clients, suppliers, or even strangers we only meet for a short time.

Check yourself. If you are doing any of the things in this list, you are sabotaging your relationships. Remember, happiness is a choice. A happy relationship is a choice as well. You can always choose differently.

The seven deadly habits are as follows: 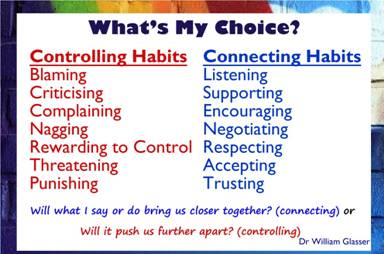 Join me next time when I explain how parents can teach their kids the choice theory and why it is important for parents to learn it themselves.

This post is part of the series Choice Theory:

Choice Theory Can Save Your Marriage

In the previous chapter of the choice theory, I explained the controlling and connecting habits—the caring or deadly habits based on William Glasser. In his theory, Glasser explained many of our behaviors as a choice. There are basic beliefs in his theory that all therapies are based on. Based on…