Your extended family can be a great help once a new baby arrives. I didn’t understand just how much until Eden was born. I was in my last year of university and working full time. My parents lived over 3 hours drive from us.

I never had a close bond with my mom. When others talked about having their moms around when you had a baby, I didn’t really know what to think about it. When Eden was born, I was in hospital for 10 days. I got a terrible infection and my mom came to stay with us after we were discharged from hospital because I had to go back every day to change my bandages.

We got home and I didn’t really know what would happen. But my mom incredible. She had already had 5 kids of her own and she knew exactly what to do. She said to me, “You focus on eating, sleeping and breastfeeding” and that is exactly what I did. Meanwhile, she cooked, cleaned and played with Eden, massaged her and sang songs. I never knew my mom could be like that. She was awesome.

One day, a young boy asked his grandma about her thoughts regarding changes that happened in the world since she was born. This is what she said… 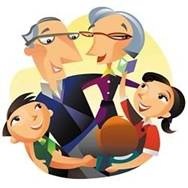