Yesterday evening, Noff and I went for a walk around the neighborhood. As we were walking, Noff told me she was going to have a “book character day” today and she had decided to dress up as Pippi Longstocking. She was very excited, as kids often are, and wanted to know every little detail about Pippi’s character, so that she would do a good job at school.

“What clothes did she wear? How did she do her hair? What did she do? Tell me everything you know, Daddy”, she said.

Besides being her all-knowing, bullet-proof parent (standard parts of a parent’s job description to a 7-year-old), I also happen to have some firsthand experience with the TV series Pippi Longstocking from my childhood, which Noff could only get a glimpse of on the Internet (ain’t YouTube grand?).

So I started telling her about Pippi.

“You know, Pippi was a very special girl. She was the strongest girl in the world, and the richest”, I said and Noff listened eagerly, “She was so strong she could lift her horse with her hands”. 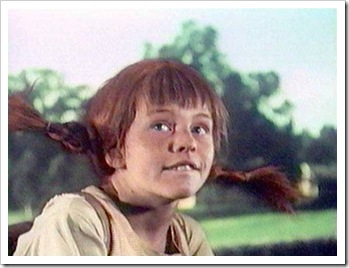 “Her father was a ship’s captain, I don’t remember what happened to her mother, but she wasn’t there, and Pippi lived by herself in Villa Villekulla. Actually, she lives with her little monkey, Mr. Nilsson, and her horse, Little Old Man.”

“In the house next to Pippi’s, there are two kids, Tommy and Annika, who come to play with her and listen to her stories about her life before her dad was lost at sea and she came ashore.”

“Now, Pippi is quite the opposite of any of the kids you know, Noff. You see, all of your friends live with grown-ups, who take care of them, cook for them, wash their clothes and clean after them, but also tell them what to do. Kids are usually not very strong, so the grown-ups can make them do things, even if they don’t want to do them.”

“Pippi, on the other hand, lived by herself, so she had to do everything herself, but nobody told her what to do. Because she was so strong and so rich, even when robbers came or any other grown-ups who wanted to force her to go to school, she could handle them with no problem.”

Noff giggled in delight at Pippi’s advantage over grown-ups, which kids sometimes dream of having.

“But to me, the best thing about Pippi Longstocking was that she did everything differently. For example, one day Tommy and Annika came to her house and wanted to play, but Pippi said she had to clean the floor. At first, the kids didn’t like the idea, but Pippi got out some big brushes, flooded the floor with soapy water, tied the brushes to their feet, and they all skated away, having the time of their life, until the floor was sparkling clean.” 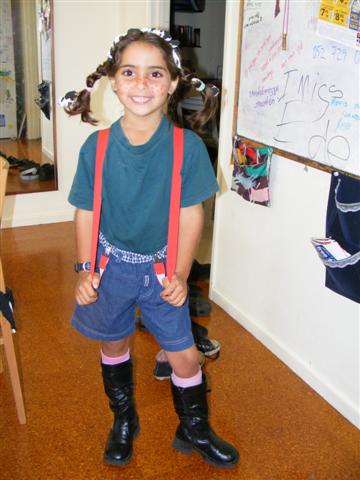 At 4am, a small and excited bundle crept into our bed, making some excuse why she couldn’t sleep, but we knew what that was all about.

In the morning, Ronit got a special hair wire thingie, braided Noff’s hair so that she had two braids sticking straight out of her head to both sides, drew freckles on her cheeks and helped her put on long stockings, boots and suspenders.

Noff finished breakfast in a flash, while walking around the table and had her schoolbag on her back a good 20 minutes before it was time to leave, making excited sounds as she paces to and fro.

Yeah, OK, so what about it?

Well, to me, Pippi Longstocking is a great symbol of the conflict between internal and external motivation.

Yes, yes, Pippi’s entire world, including her two best friends Tommy and Annika, follows rules and conventions that make them miserable. The grown-ups in the village want her to go to school, because “that’s the place for kids”.

The kids’ mother wants them home for dinner at an appointed time and makes sure they are clean and presentable before they leave the house. People say, “It’s not right for a girl to be living alone, and with animals no less”. 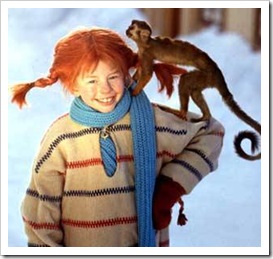 But Pippi doesn’t care what others think and she is HAPPY. To her, cleaning the floor is a game, running away from robbers is a game and making food is a game. When the robbers kidnap her, she lets them carry her for a bit, because this may turn out to be interesting.

Pippi sleeps with her feet on the pillow, because it makes her comfortable. She wears colorful clothes that do not match, with spots and stripes and long stockings, all ruffled and untidy, because that is what she feels like wearing. She spends her money generously and plays games all the time, because it makes her happy.

Yesterday, before Noff and I got home, I finished by saying to her, “You know, Noff, I think you are very much like Pippi Longstocking. You have lots of fun at everything you do, you are friendly and you experiment all the time.”

“Even though you live with us and we sometimes tell you what to do, we also let you wear your hair in strange ways to see if you like it, you mix and match your clothes as you like and you are very strong and independent, because when you need to get some Nutella or peanut butter from the top shelf in the pantry, you come up with very clever ideas and you do brave things until you get it and make a sandwich with it.”

You should have seen the look on her face!

So here is a quick summary video of Pippi Longstocking. Use it as inspiration for yourself to inspire your kids to be free thinking, confident and kind hearted.