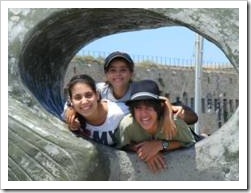 My daughter Noff (the youngest girl in the photo) is a very inspiring kid, especially since growing up in a house with two very talented siblings is not easy.

When my son Tsoof (the boy in the hat) was born, everyone said, “Poor kid. He was born after Eden, so he has no chance”. You see, Eden (the big girl on the left) was the symbol of perfection. I have to say I had some doubts about Tsoof’s chance too, but he proved everyone wrong when he found his niche in our family as the a very talented musician.

So, when little Noff was born, people said the same thing, “Poor kid. Being Eden and Tsoof’s sister, she has no chance”. At that point, we had no doubts she would prove them wrong. We only had to give her the right “playground” for her to think that being the sibling of the most “perfect” people in the world was an inspiration, not a competition.

At the age of 4, Noff started dancing and asked to go with her older sister to an evening hip hop class, which was hopeless, because she was so tiny and the people in the class were adults. She went anyway and would have kept going, but this got in Eden’s way too much and Noff needed to sleep, so we said no.

A year ago, after watching her brother play music most of every afternoon (and weekends) and after Eden had started playing piano again, Noff asked to play the keyboard too. Since we did not know if she meant it or just wanted to experience it, Eden agreed to teach her. We bought some theory and beginners books and our house was full of music (slow, deliberate and often incorrect – you know how that works). 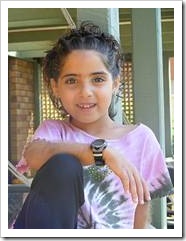 Last year, Tsoof started composing his own music. Last month, we bought him a special cable that connects the keyboard to the computer and allows him to compose music much faster (a MIDI cable, if anyone is interested). It was amazing how something that cost $17 made him so happy – almost like buying your teenager a car.

On the weekend, he was away for the Australian Percussion Eisteddfod competition with the Macgregor Percussion Ensemble (they won first prizes for Best Ensemble and the Best Novelty Piece) and 8-year-old Noff was home with Mom and Dad. At one point, she went to the keyboard and played something.

She played it so many times, I asked her, “Noff, what is this tune?”

“It’s beautiful. Who wrote it?” I asked her.

We were very impressed (not to mention proud) and Gal immediately went to connect the cable we had bought and find out how to record her composition. It was short but beautiful and when I looked at the keyboard, this is what I saw. 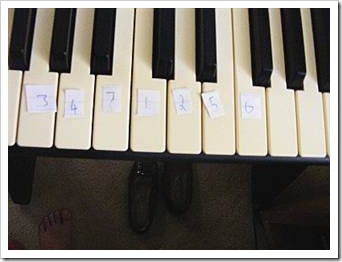 You see, Noff did not know how to remember her composition, so she took a piece of paper and wrote numbers on it to remember how to position her fingers. To me, that was even more impressive than the music.

At night, when she went to bed, Noff said, “When Eden comes, show her my composition” (Visual kid. What can you do? She even sees music).

Two days later, Tsoof came back from a music competition in Sydney. On the way home from the airport, the first thing Noff said to him was, “I wrote music. You’re gonna love it. I want you to listen to it when we get home”.

As soon as we got home, the two of them sat at the keyboard, Noff playing her new masterpiece and Tsoof admiring her and adding his own improvisations to it.

Here they are. Watch them!

[Side note: When my oldest daughter Eden was one year old, I thanked the inventor of the video camera and rented a big, bulky one to capture just one day. I am so happy I can record my kids now with such ease, because I know that otherwise, in 20 years, Noff would never believe me she wrote her first composition at the age of 8.]

Instead of feeling she could never match up to her older, talented and experienced brother, Noff simply decided to write some music and focused on it until something she liked came out. She had no inhibitions whatsoever and proudly presented her new and exciting creation to anyone who would stand still long enough.

Since then, she has also choreographed a dance routine, working several hours on it over the course of a few days. She welcomed advice and ideas and kept at it until she was happy. Then she showed it to everyone with pride.

If you can get a kid to feel this way, the sky is the limit.

May your kids inspire you every day,
Ronit

Eden got this nickname when she was 7 years old and her teacher complained she was reading out loud while all the other kids switched to silent reading. The teacher was concerned that reading out loud would interfere with her reading development. To handle the need to verbalize what she…