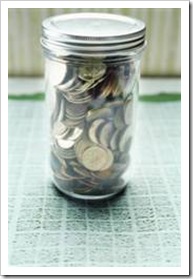 Sabrina was very surprised when she heard people talking about her grandfather. Ever since she could remember, he was a wealthy person. He was always dressed well and had the most advanced gadgets, a fancy car and the most beautiful house in town. He was generous, took them to restaurants and once even invited the whole family to join him and Sabrina’s grandmother on a cruise around the world.

Sabrina did not believe it when she overheard the school librarian talking about the days her grandfather had been so poor he used to walk 45 minutes to work to save the money required for a bus ticket. “He made all his money from the jar”, said the librarian to her friend. Sabrina thought he had made his money from building houses and was very surprised.

That weekend, when she went to visit her grandfather, Sabrina asked him about the jar.

“Is it true that you made all your money from the jar?” she asked

“Oh, yes. Would you like to see my jar?” He asked. Sabrina said she would be happy to and he took her to his living room and showed her a big old pickles jar full of coins.

“This is my famous jar. Everything I have – the house, the business, the car and the payment to all the people working for me – I got from this jar”.

Sabrina was confused. She looked at the jar and estimated there was no more than $25 in it. “But Grandpa, this is just a jar with some coins. How could you get all those things from this jar?”

“Oh, this is a very special jar. It is a magic jar”, her grandfather said and touched his jar gently. Sabrina was fascinated. She sat on the sofa, determined to hear the story of the Magic Jar.

“It all started many years ago, in the first year after your grandmother and I got married. She wanted to have kids and I knew I could not support them. To save money, I would walk every day to work. We bought meat once a week and for a whole year, we did not go out to the movies. Back then, I worked as a construction worker in the biggest building company in the country. We were paid peanuts and worked long hours. Every Friday afternoon, someone would come to pay us our weekly pay. One day, when we stood in line for our pay, we heard a big fight at the payment desk. An older worker was arguing over 1 cent the company owed him. He was red in the face like a tomato, shouting and swearing at the pay clerk. ‘This is my cent and I worked hard for it’, he said. Before the whole thing became a big mess, my best friend and I moved him to the side and tried to calm him down.”

“On the long way home, I could not stop thinking about what he had said. When I calculated 1 cent times 10,000 people times 52 weeks a year, I was shocked to discover it added up to my annual salary. I took a cent out of my pocket and played with it all the way home. It was small, but I knew that when it added up, it could make me a rich person, just like the owner of the construction company I worked for.”

“When I got home, I asked Grandma to give me a jar. She didn’t understand what it was for. ‘This Jar is going to make us rich’, I told her and she smiled and washed this pickle jar for me. ‘And how do you plan to make us rich using this jar?’ she asked and I opened the jar, took the cent I had in my pocket and put it in. ‘Like this’, I said and showed her the cent in the jar, ‘Every Friday, we will take out all the coins from our pockets and wallets and put them in this jar. Every Monday morning, I will take this jar to the bank and deposit the money in a new bank account that I will open for us’. ”

“And that is exactly what we did. Every week, the jar would fill up with coins and on Monday, I would take it to the bank and deposit the money in our special bank account. 9 months later, on Monday, when I came to deposit the coins, the bank manager called me to his office. ‘Walter’, he said, ‘I see that you come here every week to deposit some money. I believe you are a very determined man. How about using the money in your account to buy a house of your own? I think we can trust you with a loan'”.

Sabrina sat on the sofa with eyes wide open.

“You see, Sabrina, we were renting at the time and didn’t have a house of our own. We were paying someone else to let us live in his house. So when I came to Grandma and told her the bank was willing to lend us money to buy a house, she was in Heaven.”

“We didn’t want to take out a big loan, so we looked for the cheapest house in town and found one that was in such bad shape we could afford it. For two weeks, we had no electricity in the house and we put sheets on the broken windows to keep the wind from coming in. Every day, at the end of a hard day, we would both come home and fix and clean our new house. Your grandmother is a very creative woman and she arranged the house beautifully. After 3 months, we felt like home and Grandma got pregnant with your dad. During all that time, every Monday, I would still go to the bank and deposit the coins.”

“About a year later, on one of my visits to the bank, the bank manager called me again. ‘Walter’, he said to me, ‘I’ve heard you have the most beautiful house in your neighborhood. How about buying another one?’ I was very scared. We had a new baby, Grandma could not work and I was afraid I wouldn’t be able to pay the deposit on the house, but the bank manager told me he would give me a bigger loan, if I promised to do the same thing, which is buy a run down house, fix it and rent it.”

“Six months later, I rented the new house to a new family with 3 children. A year after that, I worked only 3 days at the construction company and spent 2 days a week buying and fixing houses. Grandma would tell me what to do and how to make the house look nice and I trusted her good taste and did the work. Every house we bought became the best house on the street. The Bank manager and I were partners. He would give me the money and I would fix and rent. When your dad was 5 years old, I had 17 houses that I rented to others and this was when I started employing people to do the work for me. Now, I do not even know how many properties I have, but I still go to the bank every Monday with this jar”. 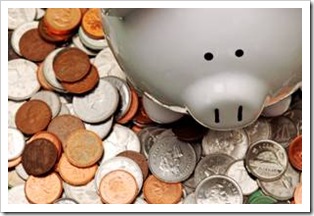 “But Grandpa, why didn’t you put notes in our jar?” asked Sabrina.

“For the magic to work, you need to put in coins. What’s special about coins is that when you put them aside, you don’t feel like you miss them. They’re small and don’t seem to be worth much, but when you add them up, you can be wealthy, just like me”.

“Can I have my own jar?” Sabrina asked her grandfather.

“Of course you can! Let’s ask Grandma for one”, he said and they went to look for Grandma.

When you are struggling financially, it is hard to think of yourself making lots of money. Because people cannot see how money accumulates, the goal of being a wealthy family seems so far it is deemed unreachable. Wealthy people do not get up in the morning one day and suddenly find they are rich. They have vision. They are determined and persistent.

The Magic Jar trick has worked for many people around the world. It is the original version of the piggy bank. It is because coins are perceived as small change that they are powerful. If you put them aside once a week, you won’t even notice you have saved so much, not to mention the wonderful lesson you can teach your kids in the process of becoming a wealthy family.

We want many things for our children. Financial freedom is one of them. Remember, if you want to raise wealthy children, you need to give them vision, courage, determination and a jar. Any jar will do.

This post is part of the series Happily Wealthy Family: