Two years ago, I organized a leadership camp for Grade 7 student leaders from 5 different schools. Unlike any other camp that is meant to be just fun, this one was meant to be challenging (and fun). We wanted the kids to go through a process of recognizing their individual strengths and needs in order to build their leadership skills.

Why am I telling you about this? Because we brought students to that camp, but found a wonderful and moving way to bring their parents their too. And you know what? Bringing parents into a leadership camp is way more effective than taking only the kids.

This year, I ran another camp and organized the same parental participation and the experience highlighted (again) many things about the relationship between students, parents and schools.

The parents’ side – writing an “I believe in you!” letter 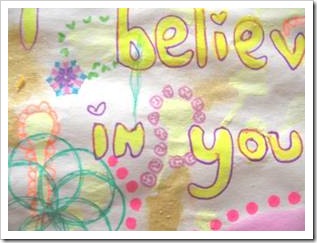 As part of the preparations for the camp, I held a meeting with all the parents who were sending their kids to camp. Unfortunately, parents do not appreciate their own value in the process of their children’s learning and character building. So when the principal who coordinated the project invited the parents to that meeting, they were surprised at first and asked why I needed the parents.

At that meeting, I learned (again) that parents who do not see themselves as leaders do not recognize their role in ensuring their kids’ success at becoming good leaders.

I also learned that parents are usually not informed of what happens with their kids in special projects, but they would love to know and be aware of the rationale behind everything the educators do. It does not mean we need to flash big words and vague statements that would please the department of education, but we can easily and simply explain even to those with a low level of literacy what we expect, why we do it and how they can help make it happen.

I learned that parents are looking for tools to support their kid and that the system expects them to know things that teachers study for years.

So as soon as I gave those parents a tool, they all used it.

I asked the parents to write a letter to their kids. I call this the “I believe in you!” letter. It would be written in secret and given to me before the camp. I wanted to meet with the parents for two reasons.

Well, I sent the notice about the “I believe in you” letters 2 months before camp. I had a meeting with the parents about a month before camp and it was amazing to see what happened.

Some parents wrote their letters by hand, while some typed it on the computer.

Some parents sent their letter to me by post, while some emailed it to me.

Last year, on the day of the camp, we found out we were missing one letter. The parent of that girl was a teacher at one of the schools! We alerted that mother and left someone at the campsite’s office to ensure she would fax the letter on time.

This year, on the evening before camp, I received 3 “I believe in you” letters. On the morning of the camp at 6am, I got a text message from one of the parents saying, “I’ve just sent you the letter. I hope it’s not too late”, which meant I had to turn my computer on and print it seconds before I left home. Luckily, I always leave myself some extra time for these things. Phew! 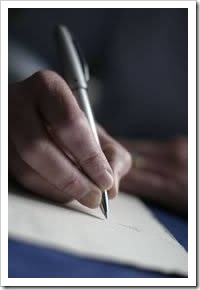 That made me think about students getting homework every day and parents nagging them about not doing it on time. I gave them a single task 2 months ahead of time and there were still people who did it at the last minute.

I was not the parents’ teacher, but I wanted to tell them, “Wake up guys! If it takes you that long to complete a task, what kind of an example is that for your kids who are aspiring to be leaders? You’re lucky I won’t tell them when their letter was sent to me, so they won’t use it against you next time you nag them about homework”. I wanted to, but I didn’t (I am just telling you).

One of the principals, Derek Brady, was also a parent of a student leader. I learned a lot from him about what actually happens to parents who write such a letter.

He said the first question is “Who should write it? Mom or Dad?” Good point. I had never thought about it. If one of you writes it, what about the support from the other one? And if you write it together as “We – your parents”, is it less personal?

Derek also told me they had written many drafts. Trying to balance personal things, family matters and showing love, while not being pushy was a bit of a challenge. What to include? What not to include? Will it be shared with others? Should you use private nicknames or not?

I knew about some of the challenges before, so I had brought to the parent meeting a sample “I believe in you” letter I had written to my own daughter for the parents to use as a guide.

This is my sample letter for your benefit.

Sample Letter from a Parent to a Child

I am happy for the opportunity you have to be at the front, leading people to change the world into a better, more just and happier place. If it seems hard because you are young, I want you to know that when you were just one day old, you managed to change our life, so age is not an obstacle to making a difference.

You are such a wonderful, sensitive girl and for many years, I was so happy to see how friendly you were, how understanding and honest, standing up for what you believed. I want you to know that for a parent, it is great joy to know that you have inner strength and strong beliefs about fairness, acceptance, tolerance, caring and sharing – those qualities sure make you a great leader.

Enjoy your camp and I am sure that it will be wonderful and fun with lots of learning and character building. You can do it! I believe in you!

I love you,
Mom

While the kids were on camp for two days, the parents talked amongst themselves about what happened to them while they wrote the letters. I found out later that parents went through personal growth while writing this letter and that it was not easy at all.

Success is climbing upwards and for kids (and grownups) to succeed, they need someone to hold the ladder for them – a support structure that is there to remind them to move forward – like the caddy of a champion golfer. Parents are the best support group for their kids, because they have the purest interest in their kids benefit and good fortune.

As a teacher, I cannot hold one kids’ interest higher than others’ and I have 30 of them at any given time. That is why parents are so important in this process. 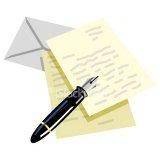 Next week, I will tell you what happened at the camp when a girl from the office came after dinner with a stack of envelopes, saying, “You’ve got mail”. The kids rushed to stand next to me and quickly discovered I was holding letters for each and every one of them.

Come back next week or subscribe to read what happened.