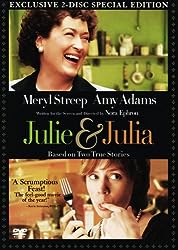 This week, the kids rented the movie Julie & Julia and we sat and watched it as a family. Ronit and I had seen it in a cinema and thought they would like it, if only because lately, they have been following some cooking shows on TV and spending more time in the kitchen (it is now Summer Break in Australia and school only starts in a few days).

Now, there are two kinds of movie watches: those who hate to watch movies more than once (“I’ve seen it already, so what’s the point?”) and those who like it (“I already know it’s good, so it should be fun”). Kids are typically the second kind and can watch the same movies over and over again. Me too…

As it happens often when I watch a movie the second time around, I end up seeing a completely different movie from the first time. When the movie is new, most of our attention is spent on figuring out the plot, getting to know the characters and admiring the way the movie was made – music, special effects, camera work, etc. The second time around, we already know all this stuff and we can really dig deep into the nuances in the dialog, the hidden messages and, well, the glitches and the hints to other movies.

So as we watched Julie & Julia, I realized just how well the movie captures the great value of setting goals and the characteristics of successful goal setting. I was so impressed I made it a point to describe these things to my kids on our daily walks together.

At the beginning of the film, Julie is aimless and famously has the self-image of someone who never finishes anything. Changing herself is a monumental challenge, which is why she must commit herself in such a way she can never back out. It is finish or bust this time.

Here is what she does:

The difficulty kids have with goal setting is their short life experience. Without knowing enough about cause and effect, kids focus on having fun right now. Spending any amount of effort on a reward they may or may not get in the future is just not something they do.

In the famous 1972 “Stanford marshmallow experiment”, psychologist Walter Mischel put kids in an empty room and put a treat next to them. He told them they could eat their treat, but if they waited 15 minutes, he would give them another. Of 600 children, a third waited long enough for their reward, some snatched the treat and ate it as soon as he left the room and most of the kids did their best to avoid eating the treat by distracting themselves (moving, playing with their hair, etc).

Mischel’s original conclusion was that older kids can wait longer and deferred gratification is related to age. However, years later, he followed up with some of the children in his experiment and discovered that those who waited longer were also more successful in life.

In 1988, Mischel found that “preschool children who delayed gratification longer in the self-imposed delay paradigm were described more than 10 years later by their parents as adolescents who were significantly more competent”. In 1990, he found a correlation between the ability to delay gratification and higher Scholastic Aptitude Test (SAT) scores.

This is where we (parents) come in.

How to teach your kids goal setting

Completing a goal gives a great feeling of achievement, growth and fulfillment and builds confidence like nothing else does. Self-confidence, in turn, makes it easier to achieve more goals, feel even better and build even more confidence.

Through the completion of her goal, Julie Powell became famous, got her dream career and found out that living your own life is more exciting and more fulfilling that living anyone else’s (namely Julia Child). May you and your kids experience the same.