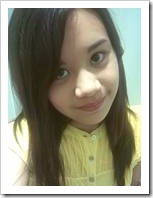 This morning, the phone rang at 7:25am. During business hours, I normally say, “Be Happy in LIFE, this is Gal”, but it was only 7:25am during Summer Break (we live in Australia) and I was still in bed, so I said, “Hello”.

The voice of a teenage girl or fragile young woman on the other end said, “I think I got the wrong number”.

Realizing this may have been due to the way I answered the phone, I said, “Maybe not. Who were you looking for?”

She said, “I was looking for someone to talk to. I thought this was the number for a company that helps people”.

“It is”, I said, trying to encourage her, “You got the right number. It’s just a bit early, that’s all”.

And before I could say anything else, she mumbled, “Oh, sorry”, and hung up.

That left me feeling helpless and frustrated.

In general, life coaching is not for people with problems. It is for people who are looking for more good stuff in life – more money, better relationships, more fun, more personal power and more happiness. Our clients come to learn life skills and we spend most of the time helping them integrate their new skills into their life. People with depression are often unable to imagine being happy and are too busy reliving unworthiness, which is why we assess our clients for commitment before we start.

Still, when someone rings and wants to talk, we always take the time to help them, if only to be kind to another human being.

Not being able to help this girl made me want to at least write about it, so that other girls (and boys and men and women) may reconsider hanging up too quickly on well-intending people who can help them. 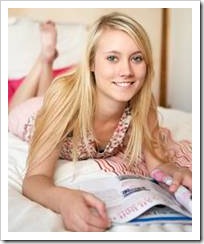 I believe too many kids are taught that giving up their desires, wishes and sometimes even needs is the same as being considerate. I believe this makes them grow up feeling self critical and even worthless.

Yes, this is a strong statement and it certainly is an over-generalization, but I see kids (especially girls) and adults (especially women) who clearly want something for themselves and give up without a fight, when being assertive would probably result in getting what they wanted. Sometimes, these people give up before they even ask for what they want.

The girl on the phone simply had to tell me what she wanted and I would have given it to her to the best of my ability. In fact, I was eager to do it. I would have spent as much time as was needed to make her feel safe, valued and hopeful. She never gave herself the chance.

I once spoke with a friend of mine about being successful in business and in life. He said to me his success came from not being afraid to ask for what he wanted. This is what he said:

See, grown-ups are so big and scary sometimes, kids cannot see their good intentions. A preoccupied adult may look angry, wearing a similar expression of intense concentration on their face, but when approached by a cute little creature, this expression may quickly be replaced by tenderness. Kids just have to ask. 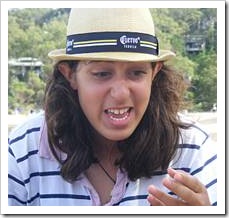 My son Tsoof is fast becoming a composer. In the past 2 years, he participated in a massive performance called Creative Generations and performed as a drummer and a dancer. It was exciting, but he felt he was lost in the sea of people, so this year, he decided to apply as a solo singer. To complete his application, he had to get signatures from his music teacher and his school principal.

Following years of frowning teachers (although they rarely frown at him), Tsoof was very apprehensive about entering the staff room and even more so about approaching the principal. He avoided getting the signatures for so long, he had to get them on the last day of the school year, when teachers and principals are both busy and eager for the students to get out of their faces, or he would miss out.

As I drove him to school, I told him, “You know, both your teacher and your principal should be very proud of you for applying, because they will see you as their representative on stage. Your success reflects on them too. Just walk up to them and ask for what you need in the simplest possible way and see what happens”.

So in he went, looking worried. As soon as his teacher saw him, she turned around with a big smile and proudly signed his application, congratulating him on his courage and wishing him success.

“How do you feel now?” I asked him when he came out of the staff room.

“I still have to get the principal’s signature”, he said.

“I know, but I’m still uncomfortable bothering her on the last day of school”, he said.

“Tsoof, she’s a big girl, you know. If she doesn’t have time, she’ll tell you. Besides, you’re giving her the opportunity to be proud. Why would that be a problem?”

He mumbled something in return, but I could see he was still feeling uneasy.

Sure enough, the principal, although still behaving in her usual strong, determined manner, quickly signed and offered her own encouragement, saying she looked forward to seeing him on stage. 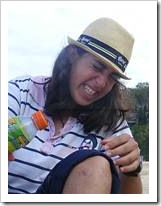 When he was just about to send his application in, Tsoof found out he could also apply as a composer and have his music played at Creative Generations by the orchestra. Being the end of the last day of school already, that meant he would have no chance of getting signatures on time, so he turned to me and said, “I’m so disappointed. Now I have to wait a whole year to apply”.

“Why?” I said, “Just ring the organizers and ask if you can still apply somehow. State what you want in a simple way, tell them you’ve only just found out and let them give you a solution. If they haven’t had any good applications yet, you could be saving them and they will love you for it”.

It took him a while to muster enough courage to ring. Long story short, the first person took a message for the second person, who rang the next day and said it would be OK for Tsoof to apply and get the signatures when school resumes. Being a few days late was no problem. We got the material together, posted it and Tsoof got a call the following day to thank him for his application, which had been received, and tell him everything was OK.

As you can see, there are a few things at work here:

Because you’re worth it!
Gal