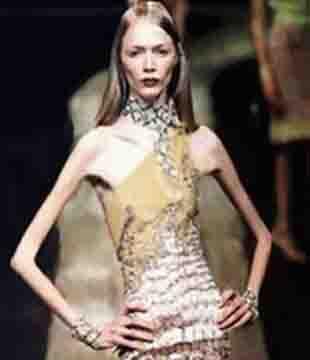 When most people think of Anorexia, they imagine a young girl looking like a holocaust survivor, who starves herself to death or throws up after every meal to keep her “ideal” weight.

In my imagination, it was always a 16-year-old girl and I was very surprised recently to be asked to coach an anorexic woman in her mid 40s who weighed 32kg. Yes, 32kg – less than my 12-year-old son. This is when I realized I needed to update my perception of eating disorders.

Recently, I opened the “Courier Mail” (the main newspaper in Brisbane) and read some alarming statistics about Anorexia. The article claimed that a research done in 2007 in Australia showed that 18% of girls starved themselves for more than 2 days and that 11% of girls throw up to lose weight (as opposed to 3.4% in 2000). 8% of girls smoke cigarettes to reduce their appetite, an increase from 2.4% reported in 2000.

When I read this, my heart skipped a beat. I have two girls, one is 18 and one is 6, and I was worried. I hope you are worried too. If you have kids and you ever go to their class or if your daughter brings some girlfriends to sleep over, look carefully, because 1 out of 5 of them will starve herself or throw up to lose weight.

If some of them are involved in some kind of sport, “Among female athletes, the chance of eating disorders is reported to be between 15% and 62%.” And I thought that if they do sports, they cannot be on a diet.

So I looked up Anorexia statistics about other countries on www.nationmaster.com and Australia is only 8th on the mortality rate as a result to eating disorders with only 8 deaths per year as opposed to the United States with 218 and Japan with 126. Germany is in 3rd place with 40. I realized the problem is much, much more severe than I wanted to believe.

Look around you. A big part of the population is developing eating disorder. The National Eating Disorder Information Center in Canada released some alarming statistic stating there are 12 times more deaths from Anorexia than the annual death rate due to all other causes combined for females between 15 and 24 years old.

If you are a parent and you have a daughter, you probably think to yourself “this won’t happen to me”. I know I did. But eating disorders are the third most common chronic illness in adolescent girls and pretending to burying our heads in the sand will not change that statistic.

A study in high schools in Canada found that 50% of girls were on a diet because they thought they were overweight. If your daughter is young and you think, “I’ll deal with it when she is a teen”, think again.

But the issue of eating disorders is not a problem concerning your daughter and her girlfriends. It also concerns their mothers. The American Psychiatric Association Work Group on Eating Disorders estimated in 2000 that 8% of women suffer from either Anorexia Nervosa or Bulimia Nervosa.

This is something that made me look at myself. Is it true that 80% to 90% of women are unhappy with their size? Is it true that 70% of women are on diet? And what killed me was really the National Eating Disorder Center in Canada reporting that “A survey of parents found that 1 in 10 would abort a child if they knew it had a genetic tendency to be fat“. 1 in 10. That is 10% of parents.

Would you do that? If parents think like that, why are we surprised our daughters would die to be thin?

Again, I am a great believer of taking care of things before we lose control. Early detection is the key. Treat any problem when it is small and manageable and I think of the 32kg woman I went to see and wonder when it had started for her.

If you are worried about your daughter’s eating habits and you want to make sure she will not be part of the above statistics, first get yourself out of it. Look at yourself and notice if you have eating habits that are warning signs.

Answer all these questions to yourself and when you feel confident with your body and weight and have happy thoughts regarding food and health, you are on the right track to ensure your daughter will not die to be thin and she will safely grow to be a happy and healthy girl.