My mom used to say that kids have an easy life, but I wonder about this. Every time my kids (my own kids or kids I teach or coach) react to difficulties and challenges, I wonder about it again. I know my mom meant that not knowing too much and having no heavy responsibility is a bliss, but I say that not having enough life experiences, not having enough skills and not being able to express yourself properly can be the opposite of bliss sometimes.

A month ago, Gal went to the doctor to remove a wound on his head that had not healed for a long time. The doctor removed a chunk of skin and a week later, when Gal came to take the stitches out, the doctor said, “It was cancer and I didn’t take all of it out” (see Finding Cancer). 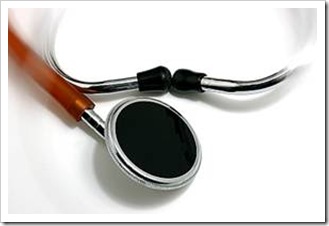 At first, we tried to digest the whole thing. I think the word “cancer” has so many bad connotations it took a while to realize what was happening. It is amazing how an hour before discovering a bit of information, people can live a normal life, but one minute after knowing, life changes completely.

It took us a while to decide what to tell the kids. The question was not relevant to our older daughter, because she had driven Gal to the doctor to have his stitches removed, but the younger ones still knew nothing.

We thought our 13-year-old son would freak out. After a week, Gal found a good time and gently told him about the whole thing. Surprisingly, he seemed to understand and showed no “side effects”.

The second I saw Gal after surgery was scary. His head was covered with bandages, as well as the sides of his face down to his chin he was in pain. The next day, the nurse came to change the bandages and things looked better than we had thought, because Gal only had two long scars on the top of his head, although they were stapled and he looked like Frankenstein. I was happy the nurse wrapped his head again and could not decide which looked worse – the bandages all over his face and head or the staples?

When we came home, the kids gave Gal scared looks. They hugged him and looked worried. When we asked them about their feelings, they said nothing.

Two days after surgery and still in bandages, Gal was brave enough to go with friends to a restaurant for a feel good evening. The following day, the doctor took the bandages off and Gal came home with a bald head and the Frankenstein staples, and the kids looked at him even more worried, but still saying nothing.

On the fifth day, I was working with Noff on a workbook I had prepared for her with math, English and expression activities. She got to a page titled “Write a story”. This is what she wrote: 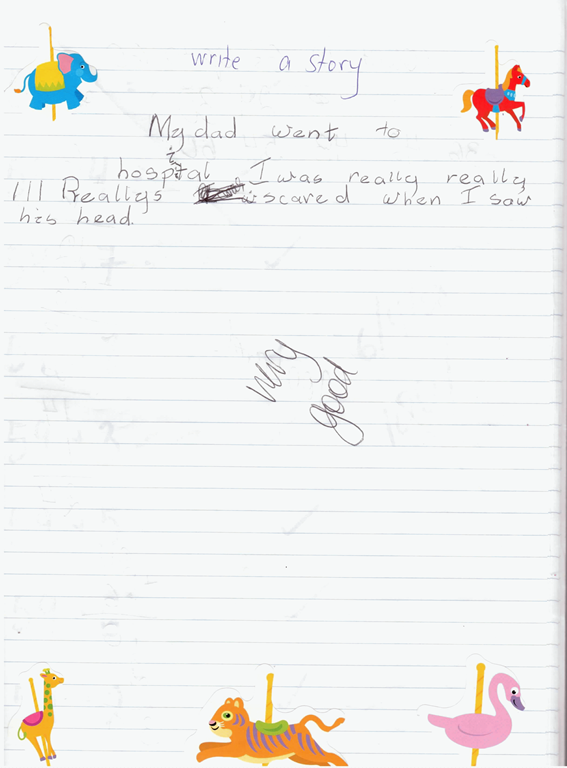 Although we knew she was scared, seeing it in writing made it so real and made me understand (again) that kids do not have the words to explain themselves easily. For 4 days, we had talked about Gal’s situation, laughed about it, explained it and done a lot to get back to our routine, trying to treat the whole thing as being “better than the alternative” (which was easier to do after the lab results came back clean).

That evening, we were sitting in our spa and Gal asked the kids again what they felt, but they still could not say what was in their hearts. Only after more and more talking and encouragement, our 13-year-old son said “It looks scary” and then our young daughter said the same. As grownups, we were worried about the health implications, while the kids worried about the way Gal’s head looked and whether it hurt (which it did).

Gal asked the kids if they wanted to touch his head and that made them feel a bit more at ease. Since then, we focused on Gal’s quick recovery and the good news that he had the type of cancer that did not spread. We found ways for the kids to express themselves more and we are very lucky that the whole drama was short and life went back to “normal” (as normal as life can be after you go through this kind of thing).

Sometimes, kids’ worries can occupy their little hearts without relief. We had asked and talked about “Daddy’s head” for a few days, but Noff had been unable to express her feelings. It was only because of a coincidental activity that she told us how she felt. In such sensitive situations, parents and teachers hold the key to their kids’ heart.

If your kids are worried about family members, friends or relatives (which I hope they never have to), it is important to allow them to express their feelings. Worries that are not expressed tend to get out of control and out of proportion.

How to encourage your kids to express themselves

You see, I am not sure kids have an easy life, because even small things like dad going out of town for work can create unnecessary worries and anxiety. Remember, kids are very fragile and do not understand life as well as you do, so do not allow them to bottle up and get themselves stressed.

Oh, and stay healthy, so your kids can have you with them as long as possible without having to worry…