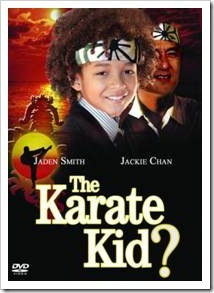 Of course we took the kids to The Karate Kid. We are not parents who deprive our kids from being exposed to popular culture. We had seen all the prequels, it had Jackie Chan, action, Will Smith’s son and a glimpse of China. What could be better? Besides, we thought it would make a good ending for their school break and something we could all enjoy together.

But for me, The Karate Kid was a total let down. Sure, I saw the old Mister Miyagi movies when I was younger, but that would not explain some of the things that bothered me. Maybe I will just start listing them and you will see why.

The obvious things were the (mostly) bad/stereotypical acting and the many holes in the story. What happened around the death of the kid’s dad? What kind of work did the mother do? Why did she choose to move to China and tell her son “We have nothing left there (in the US). This (china) is ‘home’ now”?

But the previous Karate Kids were not much better, so never mind that.

The movie is called “Karate Kid”, implying the Japanese martial art, yet it is set in China and shows Kung Fu, the Chinese martial art. If I found either Karate or Kung Fu to be an important part of my life and my tradition, I would feel offended by this, even if I fully understood the marketing incentive. I guess if the main market is made up of Americans, who cares about those other billion and a half people?

But what the Americans should probably consider is that their kids will just get more mixed up between “all those Asians” by this, which may not be great for world harmony (or neighborhood harmony, for that matter).

In two of the previous installments, American kids were the bad guys. In another one, it was the Japanese. This time, many of the Chinese people, including kids, were shown as loud, arrogant and downright cruel. The level of beating poor little Dre receives is so severe it is hard to watch. 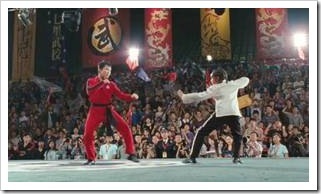 What kind of impression will western kids get out of this brutality? Will many of them go “Yippee!” when their parents suggest they might travel to China? Will they do their best to make friends with the next door neighbors, whose eyes are a bit slanted like the kids’ eyes in the movie?

At the end of the movie, the “Karate Kid” whoops the Chinese’s butt at their own national and traditional martial art, having had only a month to practice with the maintenance man. America 1, China nil. 3,000 years of practice and one gentle American kid with braided hair comes along and wins – on the big screen, too.

I believe kids may get a number of disturbing beliefs out of this particular aspect:

As the state coordinator for Together for Humanity, Ronit often presents racism statistics at conferences and schools. Alarmingly, way too many Australia kids believe that Asians are drug dealers and that they cannot be trusted. I have a feeling that movies like The Karate Kid might be contributing to this image.

The jump from seeing Chinese people as bad and/or inferior and seeing anyone who is not white American that way is very short. Unfortunately, it can also be leveraged for significant operations. Make no mistake, what children are exposed to when they are young, they retain most strongly and question least. 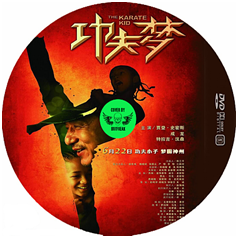 The mother in the film loves her son, but she is very powerless, motivated by guilt and quite irresponsible.

Dre landed in China not only ignorant but also resentful, which means he was not going to learn in a hurry. In some places, that can be dangerous. Oh, wait, it WAS.

If I were taking my son to another country, I would do some preparation. Language is not the most important thing to learn, because kids pick it up in no time (Eden started speaking English in 6 weeks and became a native speaker in a few months). However, the customs and culture of China are very difficult from those of urban United States, so I would make sure my child knew some basics – family structure, basic signs of respect and disrespect and important values.

The girl Dre likes tells him she is listening to Bach, so he says he knows about this band and he likes them. This scene alone, no matter how funny it was meant to be, shows him to be both ignorant and dishonest, while making those things seem acceptable.

Dre gets into all sorts of trouble, spends time with a previously-unfamiliar Chinese man (can you be any more of a “stranger” than that?) and becomes a fearless Kung Fu fighter while keeping his mother almost completely out of it. When he gets beaten and thrown around, he just puts on some makeup in the morning and drops his hat a bit lower.

My son can mope for all of 10 seconds before I know it and ask him about it. If he says, “It’s nothing”, I do not just let it go. I stick with it until I know he will be fine. There is no way known my son will get beaten up by somebody and not tell me about it as soon as he got home. In fact, he will mostly likely ring me from the school’s office or the mobile phone on one of his friends even sooner.

Dre is 12 years old (yeah, right) and struggling to be accepted by the students at his school. When his mother drops him off, she calls out after him, “I love you”, which makes him cringe, turn around and hiss, “Mom!” But she just keeps insisting on getting a loving answer from him right in front of everybody. Sure, let the kid get himself punched senseless, as long as he loves you. 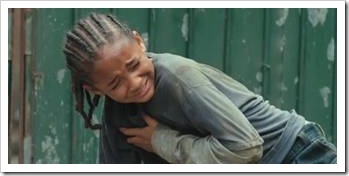 Finally, what kind of a mother says it is OK for her son to participate in a martial arts competition with only a month’s preparation? She sits in the audience and does absolutely nothing when he gets hurt, allowing him to make up his own mind if he wants to fight some more.

OK, that was the bad stuff, but what about the good stuff and what can you do if your kids really want to watch The Karate Kid?

Well, it must have been cheaper to make the film in China, but as a side effect, we got to see some really beautiful Chinese landscape, architecture and lifestyle. Our family has been to China, but we had not been to some of the gorgeous places shown in the film.

The other side effect is that many Chinese people – actors and film crew – must have been employed in this production, demonstrating that cross-cultural collaborations can work quite well.

One particular plus for me was how Jaden Smith trained to become strong, flexible and quick enough for this part. His training was shown during the credits and it must have been tough.

I think Will Smith (and Jada Pinkett Smith) created a rare opportunity for their son that very few kids ever have – to play the lead role in a movie that pretty much everyone will see. It can be difficult for such a young person to carry the film on his shoulders, but there were pictures of them being there with him and remaining his parents throughout this experience. 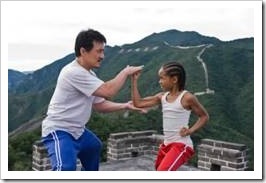 We have a good friend who is a gender equality expert, so for her sake, I will also say that showing Dre putting on makeup, which is not typically a masculine thing to do, could be seen as a message that it is OK for boys to use makeup when they need to.

Finally, Jackie Chan’s style of screen fighting always involves the least amount of hurting other people. In all his films that I have seen, he never attacks anyone and when attacked, he does his best to avoid the fight and use every means to end it without damage. His character, apart from being unable to get himself out of depression, is true to the spirit of martial arts and seems full of respect for his own culture and its traditions.

What to do if your kids have seen The Karate Kid

After the movie, I asked everybody what they thought about it and then shared with them some of the things I have written above.

I believe there is no way to isolate our kids completely from things that are bad for them. We can keep them out of harm’s way, but often, our job is to use whatever happens as a growing opportunity for them.

So now my kids know what I think about The Karate Kid and that if we were ever in similar situations, I would prepare them, help them find peaceful solutions to any problems and support them while they learned the ropes.

And when I got a bit too serious with the parenting talk, Ronit said, “You guys know it’s just a movie, right?”