Certainty is a great asset in life. We all seek certainty. Some seek it inside themselves and others seek it externally. Some find it in faith, others in routine. Certainty gives us lots of confidence in the world around us. We use it to mourn the fact we were not born fortunetellers. We do not like the idea that we cannot control the future and this shakes our confidence. If we want confidence, we must lean on some things to will stay stable in our life.

I find certainty an overrated concept. In marriage, for example, people seek signs of certainty that they have chosen the right match.

When we examined this desire for certainty, we realized that if she married him in a flashy, white dress wedding, she had a greater chance of divorcing him. The more we discussed it, the more she realized that the intentions, the desire to work on the relationship and the commitment do not change if they have the same bank account, a white wedding or an expensive honeymoon. All couples start with the right intention and lucky us, they cannot see into the future. 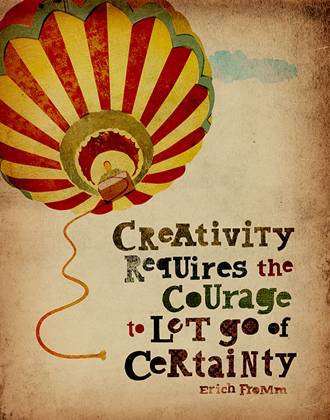 Many people choose to be employed by others for certainty. They take a mortgage based on their income. They buy a car based on their income. They even spend on hobbies based on it. They like the illusion of this certainty, because they do not know when the company might lay people off due to some financial crisis, when their position might be cut, when younger, or more experienced, people might offer better value for money to their employer or when the ruling party might change and their industry will suffer.

Many of my clients were devastated by a rude awakening from the illusion of “job security”. Over the last 30 years, since Gal and I entered the workforce (was mostly self-employed), we woke up from this illusion more than 10 times. Even now, after 13 years of running a business, we know it is easy to fall into the trap of believing that what has been will continue. We have a big contract, an amazing project, then it ends suddenly and we wonder again how secure it was in the first place.

We often look for a sense of confidence in our health. Over the years, we come up with beliefs that if we do certain things, we will certainly be fine. I had this shattered 23 years ago. I was very healthy in my second pregnancy. It was the ultimate pregnancy – no morning sickness, not too much weight gain and I was happy and active. But my son was born with a heart defect and died within two days.

We have this feeling that if we do the “right” thing, we will be immune. The second time it happened to me was when I reached menopause. I was healthy and did all the right things. When I went to see my doctor, he said to me, “Ronit, healthy eating, meditation and a positive attitude can ease the symptoms, but cannot reverse aging”. It made sense, but still, I wanted the certainty of knowing that my body would do the same things it could do before. I lived with an illusion that what had been would continue to be, and when my health did not fit my expectations, I was devastated.

The only certain thing in life is death. It is the only thing we know will happen for sure. Although we do not spend time thinking about it, it is going to happen.

From certainty to faith

Many people ask me, “Ronit, does it mean we should not search for certainty?” Well, no. It only means we should not be disappointed when our false expectations are not met.

If we want to be happy, we need to understand to stop expecting complete certainty and settle for a general sense of confidence. With this feeling, we can navigate life better. Some people say that if you swap the expectations from 100% certainty to a hope that the future will work to your advantage, it is called “faith”.

Faith is the ability to go on with your life despite uncertainty.

Many people think that faith means believing in God. I was very happy to see the movie Salmon Fishing in the Yemen, where the connection between faith and fishing was brilliant. It presented faith as a belief that something will happen in a certain way without knowing for sure that it will.

There is letting go in faith, which I find very healing and comforting. It is a great antidote to fear, to doubt, worry, anxiety, disappointment and anger. Faith gives us the ability to start walking even if we cannot see the whole journey. A “leap of faith” is when we let go and jump from where we are to where we want to be without the certainty that we will land safely.

Faith is a personal journey and can be uplifting, because we do not have to hang on to life being exactly as we expect it to be. This way, we leave room for it to be better than we have imagined.

Let go! Everything will be OK in the end. If it is not OK, it is not the end…

May faith be with you!
Ronit

In a family, the parents are like the government of a country. Not only do they make the decisions, but they also need to show the way through their actions, because everybody else (that is "the kids") is watching them all the time. In the movie Ali G Indahouse, Ali…