I was sitting in the most wonderful place in the world – on the beach of Koh Samui in Thailand. My daughter was almost seven years old and my son was just one year old and was running on the beach naked.

As the two of them were building sand castles, I learned the first thing I want my kids to know.

A 60 year-old man approached us and told us this story.

“A year ago, my only son traveled with a friend to the Far East, like many young people these days. He saved money, packed a big bag, said goodbye to his mom and me and went on his journey. The contact with the family was infrequent and irregular.

They traveled all around and at one point, six month after they had taken off, the friend decided to travel to India and my son choose not to go with him. The friend reached Goa and used hallucinatory mushrooms to the point of losing his sanity and believing he was a dolphin.

A fellow traveler called his parents and suggested that they send someone to bring him home. So the friend’s brother-in-law flew to India, found the young man and took him on a plane. The flight was very hard, because, believing he was a dolphin, the young man kept asking to be wet.

Back home, he was committed to a mental hospital, where all his family just sat around him, trying to come to grips with what had happened to him. Then, someone asked, ‘Hey, what about the other guy who was traveling with him?’ This is when his parents rang me. 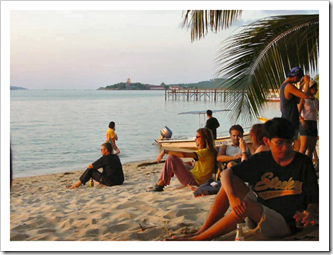 I felt like the world had fallen over my head. There was no way in the world we could get any information out of the ‘dolphin’, and I had no idea what was happening with my son.”

He sat next to me on the beach, looking tired. I looked at both my kids and wondered how I would feel.

“Well, the only thing a parent can do. I had a travel agency and I was a sole operator, so without me, the business had to be closed, so I closed it, bought a ticket to India and went to look for my son.”

I thought to myself, “There are almost one billion people in India. It is not easy to find a kid there. A needle in a very large haystack indeed.”

“I had to start somewhere, and India was where my son’s friend was found”, he explained, looking at my surprised look.

“I made some fliers and went to every place where backpackers stayed. I met thousands of them. Some of them had had no contact with their families for months. I contacted all the embassies. It was devastating to see at each embassy photos of travelers whose families were looking for them and begging other travelers to contact them if they knew anything about their kids.

I was really lost for 3 month, until I reached Thailand. A guy from the embassy told me there was a ‘full moon’ party in Koh Pangan and suggested I try there. Last night, I came to Koh Samui and took the ferry to Koh Pangan. Have you ever been to a ‘full moon’ party?”, he asked.

“Crazy place. Full of ghosts. I looked at all of them and thought about their parents. Eventually, I found my son there. You should have seen his face when he saw me. We both cried for hours. But he is not the same kid who took off last year. He looks like a skeleton and he is so affected by drugs that he talks slowly. I convinced him to come back with me as far as Koh Samui to talk.”

While we were talking, a handsome, very skinny guy walked towards us.

“This is my son”, the older man whispered and introduced us.

His son wore big ‘fisherman’s pants’ a T-shirt and had a small fabric bag, a tie-dye cotton garment and a book. He sat next to me and starting talking about his adventures, while his father moved away quietly.

After less than 3 months into his trip, he had lost his large backpack, his passport, his money, his contact list and all of his belongings and started to “travel light”.

“The cotton garment was my towel, my bed sheet, my pillow and my clothing and I only needed one book, because I kept exchanging books with others”, he explained to me.

I was thinking about toothpaste, toothbrush and food. He was very skinny and spoke very slowly, as if some of the signals from his brain to the muscles in his mouth got lost along the way.

We started talking about the book he was reading at that time, “Celestine Prophecy”, and the conversation was flowing and interesting. He spoke slowly, but made a lot of sense. For a 23 year-old, he had wisdom beyond his years and he talked like someone who had experienced a lot and dedicated a whole year to thinking.

He was an only child, and felt his family had had such high expectations that he could not fulfill them. The pressure had made him want to be as far away from his parents as he could.

“I could never make them happy”, he said, “Being an only child is a big burden and it was too hard for me. Everything I did was a failure to them. They loved me only when I did things they wanted me to do, and since I haven’t been doing what they wanted since I was 15, they didn’t love me”.

There were tears in his eyes. I thought about my life and my parents. It wasn’t easy to switch between being a parent and being a kid. It might be part of being a child, thinking our parents love us only if we do what they expect us to do. I could see how my behavior could give my kids the impression that I love them only when they did what I wanted.

“I am sure they loved you even when you did not do exactly what they wanted you to do”, I said, trying to defend all the parents in the world.

“Your dad sure loved you enough to come and look for you on the other side of the world, you know. It was unbelievable he’s even found you”, I said.

He looked at me surprised. It sure sounded like I knew more about his father’s adventures in the past 3 months than he did, having only met him the night before, after a year of soul searching and looking for courage to face his parents again.

He took his cotton garment out of his little bag and wiped his sweat, looked at my kids laughing and throwing sand at each other, and said the sentence that would change my life:

“If I only knew”, he said softly, nearly crying, “If I only new he would come for me.”

We were in Koh Samui for 3 days. One of those days was on the main beach talking with the man and his son. In the evening, they came to say goodbye.

“We need to get to know each other again”, they both said before leaving.

The sunsets on the Island of Samui are spiritual. My kids were running on the beach, laughing happily, and I knew that my love for them was endless, but maybe it was not enough.

I heard the young man’s words over and over again in my mind, “If I only knew”. I imagined his life without this knowledge and his life with it and I knew exactly what was the first thing I want my kids to know.

Watch a video clip of me telling this story at a parenting workshop.

This post is part of the series Things I Want My Kids to Know: