In the blog Monsters or victims, David Bogner wrote about the responsibility parents choose not to take over their teens’ life. The post came as a result of a debate over a serious rape case, where a couple of 13 year-old boys drugged and raped a 12 year-old girl, who then went into coma.

In every shocking event like this, blaming someone (sometimes ourselves) always seems to be the first reaction, but is it the best way to deal?

I believe that the more incidents like that we read about, the more we face the risk of going numb. The more extreme these case are, the faster we will erase them.

My friend, Meredith, is a psychologist working with drunk drivers. She explained to me why ads with accidents and lots of blood only make people think, “This will not happen to me”, and ignore the message of safe driving, wearing a seat-belt or drinking responsibly.

Much like drivers ignoring bloody commercials or smokers ignoring the horrifying pictures of their failing lungs, parents ignore news about 13-year-olds raping a 12 year-old. The “It won’t happen to me” defense mechanism kicks in immediately.

My guess is that things start going the wrong way when blaming is a tool to ease the pain. Of course, every aspect of those teens’ life contributed to them reaching that point – school, TV, movies, the media and their parents – and all of them need to be evaluated.

I tend to agree with David Bogner that parents comes first, but not because it is their fault but because they are the most important agents in their teen’s life, not to mention that they are legally responsible until their kids reach 18 years of age.

In his post, David tells about a mother, who does not comment on her young daughter’s smoking, fearing of being perceived as her “enemy”. 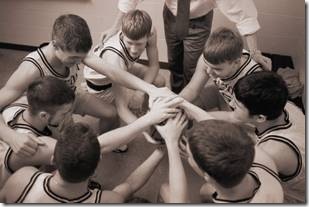 Would this be any different if the daughter was doing drugs, drink driving or having irresponsible sex? Would she be her daughter’s friend if she said nothing about them too?

This attitude gives teens a tool to blackmail their parents emotionally. Parents essentially teach their kids that they want so much to be “loved” and “accepted” by their kids that they will do anything to get it, even if this means compromising things that are very important to them, like they’re child’s health and safety.

At this stage of the teens’ life, when it is so important for them to be loved and accepted, this behaviour also gives the teens the message that it is OK to give up health, safety, self esteem, etc for acceptance.

And I ask you, with parents (“friends”) like this, who needs enemies?

The real questions parents need to ask themselves are:

As an educator, I believe that real education is beyond Math, English or Science achievement and therefore are limited in the school system and can only, only be given at home by the most important people of all kids, their parents, their family, their grandparents,  unties and uncles and everyone being a role model to them.

Nothing will change if we blame, but much can be gained by looking forward and taking responsibility.

Blaming is like sailing on a ship and throwing an anchor. The more you blame, the more anchors are in the water and this makes it harder to move, to change. When blamed, most people dedicate most of their energy to defending themselves, rather than thinking of the lesson to be learnt.

Ask yourself what you can do to be your teen’s friend and you may find they want you to set the boundaries and “save them from themselves” when they make mistakes. Being afraid of parenting your teens only sends a message of insecurity.

If responsibility needs to be taken, between parents and teens, who do you think should take it?

We need to ask ourselves what values had to be sacrificed by a teen in order to commit rape. We can only change the news by taking responsibility for our own children and committing ourselves to regarding respect, health and safety higher than the approval of others.

About 16 years ago, I went to visit a family member, who had her first child at the age of 42. I was very happy for her and traveled for 2 hours to see her precious new baby. She was so overwhelmed by the 10 days of the "mom experience"…

Babies' relationships with their parents in the first years of life has a significant impact on their future relationship. As babies, the attachment they have to their parents will become a blue print of their attitude towards themselves and others. During that period, they create a "navigating map" and use…