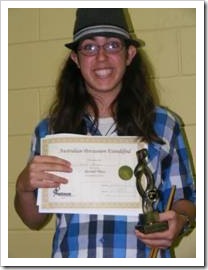 a coach who works with parents, I usually meet with those who think kids need to be managed better. Coming from a family where saying good things about your own kids is bragging, it took me a while to get over that and use my kids as inspiration for others, just like they are an inspiration for me.

You see, as a kid, I lacked something that was very important for success in life and only when I found it at the age of 16, my life changed course. My kids have grown up with it. It is called “dedication”.

Last month, Tsoof participated in the Australian Percussion Eisteddfod, a national competition for primary and high school percussionists. He has been participating in this competition in the past 3 years in different categories and his percussion ensemble has always won something.

Tsoof is very fortunate to study with one of the best percussion teachers in Australia, David Adelt, who manages to get amazing performances out of his students, which seem super human to us.

This year, it was hard for Tsoof to prepare for the competition. As you may know, he has a very full week, starting at 7:15am 3 days a week and finishing between 4:30pm and 6pm 3 days a week. He is in Grade 11, which is the toughest year in Australian high schools, and studies composition at the Young Conservatorium.

When his classmates complain to his music teacher about writing a 1-minute composition, the teacher gives him as an example of a kid who writes 15-minute compositions in his spare time for fun. This kid is busy. We do not know when he has time to do his homework, but this year, he received an excellence award for high academic achievements.

While many other parents need to nag their kids about school and homework, we need to help him balance school and fun, because we do not want fun to be pushed aside.

While other parents nag their kids to practice their music, we sometimes need to help him stop playing or singing or composing.

While other parents need to force their kids to get up in the morning (especially on cold mornings), Tsoof sometimes wakes us up, dressed and ready with food he had prepared for a whole day and asks which one of us is taking him to school. 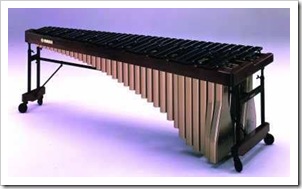 This year was especially hard for him, because he ached for some time off and for getting just one more hour of sleep. His timetable was so full of performances and competitions (mostly for school), including some weekends, that when he registered for the Percussion Eisteddfod, he thought he would not go into any individual section, because that would mean even more practice and even less time.

By then, he already had 3 difficult pieces to play (by heart) with the percussion ensemble and he did not have a marimba or a timpani set at home (thank goodness). He said that even the other two talented girls in his ensemble, one of whom had won first prize the previous year, were not planning to compete.

We knew how hard he was working, so we told him he could make up his mind about registering to the competition, but his teacher somehow managed to convince Tsoof and the other two girls (we call them “The Three Musketeers” – they are incredibly talented and have been playing together for 4 years) to register as a trio. Without even blinking, with 3 weeks to go, he gave them an amazingly hard piece to play together on a single marimba!

The first time we saw The Three Musketeers playing this piece, all the parents were in total shock. They played some of it with 4 mallets (marimba sticks). Sometimes, their speed was so high that my eyes could not follow the mallets. While playing, they had to make sure their mallets did not clash.

They memorized it all, played it by heart and even made a bit of a show out of it. The amazing thing about these kids is that they never use notes in their performances, no matter how difficult, and they play without a conductor. That way, they have to listen to one another all the time to make sure they all play together.

You have to see it to believe it.

Except pride, which I have plenty of, and which I use for my “pride therapy” every day, I looked at these three great kids and asked myself, “What do they have in common? What is it they have that makes them so talented and successful in what they do?”

The more I thought about it, the more I realized that apart from having an amazing teacher, who pushes them beyond what they think they can achieve, and besides supportive parents, these kids have incredible dedication. They are a pure example of what dedication can achieve.

Dedication is the act of giving yourself totally to a course of action. An oath you give yourself to do something, a commitment or a promise that people make to themselves and/or to others to be true to a course. 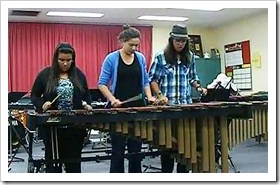 In some strange way, together with dedicated parents (trust me, you never get such kids without dedicated parents, even if that dedication is put on trial many times), these kids are dedicated to each other, to finding inside themselves abilities they never knew they had, are deeply loyal to their teacher and are committed to excellence. David trusts them to play without notes and they never fail to show him they are worthy of his trust. He trusts them to play without a conductor and they never fail to prove they can. It is rare to find such teachers and I salute him in so many ways, not just for making my son so good, but for teaching him what dedication is and helping him realize his talents and abilities.

One of the other musketeers won third prize on marimba (2 mallets) and second prize for marimba (4 mallets). Later that week, she also got the third prize in the Open category, competing with university students on vibraphone (4 mallets).

In ten years, they will probably not remember all these wins (there are so many of them), but they will still posses that trait so essential to winning in the game of life – dedication.

I think I have found a good formula for success:

Super Kids: When Academic Success is Just a Side Effect

Last week, on our way back home from a weekend at friends' house, our 12-year-old son Tsoof asked if we thought he was a "super kid". In the past year, we talked to him a lot about three kids in his music department that everyone, including us, thinks of as…

How to Raise Gifted Children: Find the switch

In my parenting workshops, when I talk about ways to find that switch in the kids' brain and talk about Eden, who is emotionally gifted, and Tsoof, who is musically gifted, I get a feeling that many of the participants believe that they were born gifted. The hardest thing for…

Most kids develop some kind of a hobby as they grow up - dancing, basketball, music, art and so on. Nowadays, this usually means their parents have to shuttle them to and from practice, games, concerts and other events. Whenever the parents see their kids perform or display their results,…