It was one of those ads on the Internet that I thought was strange. A free invitation for an evening with Bob Proctor on the Law of Attraction. You can imagine the excitement I felt. You see, Bob Proctor is one of the inspiring people I had chosen to learn from after I watched The Secret.

At that stage, when the Internet invitation arrived, I did not know just how much I would learn from him about the Law of Attraction.

Gal and I registered ourselves immediately and sent the invitation to friends, encouraging them to join us. Seeing Bob Proctor 10 minutes away from us, in a hotel, at no cost, was not something we could imagine happening every day. Two of our friends, who live about 2 hours’ drive from us, registered themselves too, and so we made plans to go together.

We met at 5pm. The event was supposed to start at 7:30 but the invitation asked people to come at 6:30 because of the high demand for places. Just like “good kids”, we arranged to be there before 6:30.

Gal dropped us off at the hotel entrance and went to find a parking spot for the car. I went into the hotel lobby with my friends Jay and Orit, where we saw a group of people coming towards us. They stopped and told us, “There are no more seats”, and then left the hotel. We kept going anyway.

Every few steps, we met another group of people, saying “Are you here for the Bob Proctor event? It’s full”. We went on just the same, determined to get in, no matter what happens.

Three men in suits stood at the bottom of the stairs leading up to the hall, stopped people and apologized that the hall was full and no one could get in anymore. It was 6:10pm and I felt my heart drop. I was waiting for this soooooo eagerly.

In spite of people’s attempts to make us turn around and go home, we kept heading towards the stairs. Once we reached the stairs, one of the men in suits told us, “Sorry, the hall is full, no more seats left”. We needed to hear it for ourselves.

Attraction tip #1: Decide to attract what you want

We called Gal and told him not to park the car, because we were not able to get in. We stood there, all four of us, feeling a mixture of disappointment and anger. I looked at my friends, who had driven 2 hours for this event, only to find they could not get in, but while we were debating whether we should leave and give up on the whole thing, something happened to us.

The man kept calm, “Well, unfortunately, Sir, the hall is full and I cannot let anyone else in”.

The most wonderful thing then that happened was that no one got angry. We kept calm, and the guys at the bottom of the stairs kept calm.

Attraction tip #3: Be understanding: say “I am sorry” and “I understand”

Whatever we said, the men in suits just repeated the same thing like a broken record. “I am really sorry ma’am, but the place is fully packed, and we cannot get even one more chair in”.

So we decided to use the same technique. We said, “We do understand, but we cannot possibly drive back 2 hours without getting in”.

Attraction tip #4: Ask for the manager 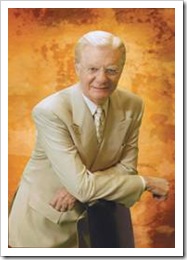 After about 10 minutes of saying, “We understand what you are saying, but we’re sorry, we are not going anywhere”, we asked to talk to the manager. One of the men said that there was no manager. “This is just an initiative of a business man who has paid Bob Proctor to come, and he has booked the room”, he explained.

With great admiration for that person, we asked to talk to him. One of the men, who had been standing a bit behind the others, stepped forward. He owned a successful jewelry business, and had asked Bob Proctor to inspire people to go and get themselves into business and strive for financial freedom.

I looked at him and realized that, just like me, he was a Bob Proctor fan. We could only thank him for making such an effort to make Bob Proctor available to others who attended this talk and wanted to get some of his wisdom.

“It all got a little out of control”, he said, “By the time we realized we did not have enough seats, thousands of people had already registered. I tried to book a bigger room in the hotel, but they were all full tonight”.

He was so honest, we could not be angry with him for disappointing so many people. After all, he did his best to do a good deed.

And you know what, we were not angry with him at all.

“Is there anything you can do to help us?” we asked instead, and he smiled and thought about it for a second.

“Honestly, there are no seats”, he said.

“There are no aisles”, he said.

It was just before 7:15pm when we entered the hall. It was a small room, packed with normal chairs, without any spaces between them. There was no room in the aisles or even on the floor. We found some considerate people who agreed to sit on only half a chair and let us squeeze in.

The MC introduced Bob Proctor and he came on stage with his white hair and look of glory. He was great, but by that stage, it did not really matter anymore. That evening, I had already learned a lot about using the Law of Attraction for getting what I want in life. So much so, that I got what I came for in full, even before Bob Proctor said the first word.

Thank you, Bob Proctor, for the great lesson!
Ronit

All too often, we ourselves having a bright idea, only to shoot it down a few seconds later with, "Yes, but what if ?" Since the idea was still fresh in our mind, even the smallest hesitation can sometimes bury it, never to be seen again. Worries, stress and negative…