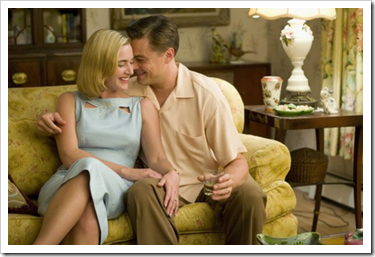 Ronit and I love movies about relationships. We prefer movies showing “real” people (as opposed to flashy, overly unique characters) going through “real” challenges and hopefully completing a positive personal journey by the end of the film. This way, we can take something home with us, discuss it, learn from it and share the growth.

Last weekend, we watched a movie called “Revolutionary Road”, which talks about something you may be able to relate to – giving in to societal pressures and giving up on your dreams. Ronit and I could certainly see ourselves in the main characters of the film in many ways.

Frank and April Wheeler live at a time when conventions were the foundation of society. Men provided for their families, women stayed at home and cared for their kids and owning a nice home was the main aspiration in life.

Frank spent some time in Paris and dreams of going back there for a while. Over the years, believing this could never happen, he sinks into a boring routine, gradually drifting apart from April, spending more time away from home and even having an affair with a girl at work.

One day, April finds a way for them to come back to life, to be free again. She works out a plan for them to move to Paris for 6 months and the two of them enjoy planning, telling everyone getting ready to go.

However, apart from one certified lunatic, everyone around them starts doing their best to spoil their plan and get them to stay in their traditional hollow roles, doing what is “expected” of them by “society”.

Now, if you have ever met “society”, please raise your hand.

Have you ever seen a copy of the “expectations”? I seem to have lost mine.

You see, “society” and its “expectations” are merely imaginary collections of beliefs we have accumulated over the years subconsciously and which we use to make us feel comfortable denying ourselves the things we deserve.

OK, here is an example. In Revolutionary Road, Frank and April visit their next door neighbors and good friends, Shep and Milly Campbell, and tell them about their Paris plans. The Campbells ask some questions about the plans and say they will miss them, as you would expect good friends to do. However, are completely taken aback by the whole idea and encourage each other later on in their strong opposition to the whole thing.

At work, Frank’s colleagues mock him for his intentions to be supported by his wife while he finds out what he wants to do in life.

All these people are protecting their own decision to abandon their own dreams in favor of money, marriage, house and status. If the Wheelers go to Paris and have a good time, everyone else will feel foolish. The idea of going after their dream when they believe it is too late is a threat. How can anyone live comfortably, knowing they have sold out?

When Frank and April were engaged in their dream, everything seemed to flow easily and happily. They held hands, looked at each other lovingly and smiled genuine smiles, while the people around them looked “important” or “busy” and wore fake smiles.

When Frank and April were fitting in, they pretended to be polite, pleasant and content, but they did not have fun with each other and both of them did radical, thoughtless things to make themselves feel better.

At some point in the movie, April shouts at Frank the following sentences, which will live with me forever:

Tell me the truth, frank! Remember that? We used to live by it. And you know what’s so good about the truth? Everyone knows what it is, however long they’ve lived without it. No one forgets the truth, frank. They just get better at lying

The only person who supports the Wheelers in following their heart is considered crazy. His parents apologize for his behavior and berate him for being “so rude”. He used to be a great mathematician, but received electric shock “therapy” which reduced his mathematical ability in order to make him more “normal”.

Revolutionary Road is the story of broken dreams and giving up. It gently describes the inevitable things that happen to so many of the people on Earth – gradually growing out of a purposeful life and into self-denial.

So I say remember your dreams! Spend some time thinking about what you wanted to be when you grow up and what you have always dreamed of doing and then go after it. Let go of the need to justify where you are and how you got there. That is all in the past. From now on, everything can be different and once you put your mind to it, things will start to unfold.