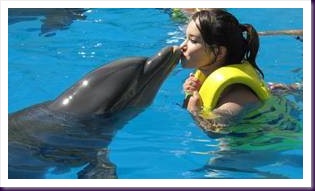 This weekend, Ronit and I went with the kids to Sea World. The weather was beautiful, we took our time and we only visited our favorite attractions. One of these was the dolphin show, featuring several of these magnificent creatures and their acrobatic abilities.

I came out of this show with two things on my mind:

What kind of animal am I?

The life coaching courses Ronit and I did were full of deep and meaningful experiences, in which we got personal revelations and faced who we were like never before. To get around any conscious barriers, many of these activities were symbolic.

One of these was the game called “If I were an animal, which animal would I be?” As you would expect, each of us chose an animal and then had to explain why.

The surprising bit was that most people chose animals that were different to what the rest of us would choose for them. This started a very lively discussion about how we view ourselves vs. how we present ourselves externally, but we also learned a lot about one another.

I wanted to be a dolphin.

To me, a dolphin is highly intelligent, has a permanent smile and a happy demeanor, can adapt to a wide range of circumstances and is extremely social. Ignoring for a second their total dependence on air while living in water and their inability to survive on land, dolphins are an ideal model within their own environment.

Back then, I was still not a life coach but an overworked and unappreciated corporate IT professional who felt quite a bit awkward in human company. To me, being happy and having a close-knit bunch of super-smart friends was the best I could ever hope for. 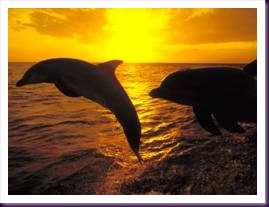 I am happy to say this subconscious model has worked for me pretty well. There are still places I cannot walk on with my flippers and I still have to come up for air sometimes, but I am certainly a lot happier than I was then and I can swim around with other humans and feel great about it.

What kind of animal would you like to be?

When you figure that out, ask your partner (if you have one) and your kids (which you probably have if you are reading this blog) and compare notes with them.

When you ask your kids, keep in mind they may not know many animals yet, so perhaps get a big book with lots of nice pictures of animals, introduce them to your kids and then pop the question.

Dolphins, kids and how not to use rewards

Now that you are familiar with my image of dolphins, you can relate to my dismay at seeing a group of them being made to jump in the air, make a variety of unnatural gestures and perform various actions on cue from their trainers.

In nature, where the dolphins have to get their own food while it tries to swim away and where they must survive attacks from other creatures and bear young in the open sea, dolphins shine through the use of their intelligence and ability to work as a team with other dolphins.

At Sea World, the dolphins’ food cannot swim anymore, because it is already dead and held in the hand of a human being who expects them to do something for their food they would never do naturally.

In the ocean, dolphins operate to serve their own best interests and are free to choose where to go and what to do. At Sea World, their environment is manipulated to serve the best interest of some people who want to make lots of money.

I felt sorry for the dolphins at Sea World.

Well, kids are naturally curious little creatures. They learn through trial and error and improve their skills all the time. Sometimes, this trial-and-error business can be a bit embarrassing or inconvenient for their parents, so the parents decide to educate them in the ways of the world.

This education, however, can be done using the kids’ natural motivation – to learn, to play, to stop being hungry or to stop being tired – or by manipulating the kids’ environment and artificially rewarding them for behavior desired by their parents – candy, ice cream, money or time out.

Here, for your viewing pleasure, is the fabulous David Attenborough describing how dolphins use their brains and social skills to feast on some fish in the ocean.

If you were a dolphin, would you raise your kids in the ocean or at Sea World?

In the last chapter, I wrote about my decision to write my personal "parenting bible" to make it easier for parents to design their own parenting rulebook, fine tune their parenting style and build confidence in raising their kids. I would like to encourage you to listen to many other…