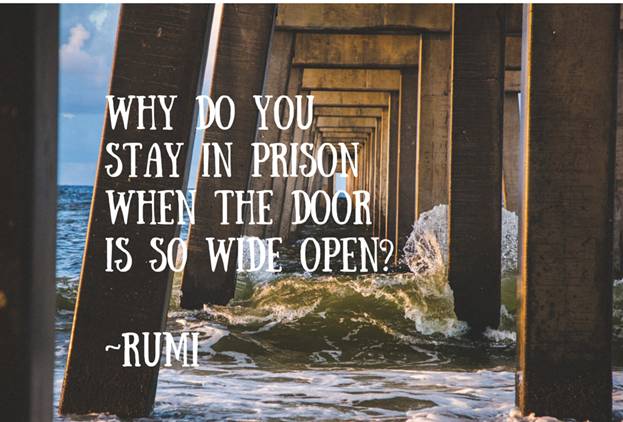 Addiction is an escape to a comfort zone that, over time, becomes our prison

When we hear the word “addiction”, we think of bad things. Most people think of drugs and alcohol, when in fact, we are all addicted to something even if we don’t drink alcohol or take illegal drugs. If every addiction were illegal, we would all be living outside the law.

That was a full on concept, but please read it again:

When we are addicted to something, it does not mean we don’t understand the consequences of consuming it. It means that the fear of not consuming it is greater.

This is why it is hard to fight addiction. Our subconscious mind is stronger than our understanding of the consequences so let’s stop talking about the consequences, because they will never be the reason we stop believing anything.

Research on addictions has found that consuming something (like drugs, alcohol or sugar) is not enough to become addicted to it. We consume it when we have a void, because it allows us to manage better with that void. People who connect well with others, are in a happy relationship, are active and have a good social life are less likely to become addicted. Therefore, the way to help everybody overcome addictions is not punishing them for finding a solution that gives them (brief moments of) comfort, but helping them create the connections they need to replace their addiction.

Do not underestimate the thoughts about what you are consuming.

Many people believe that exposure is enough to become addicted, when in fact, that is not true at all. When I gave birth to my children and going through surgery, I was given drugs. When Gal, my husband, had surgery, he received drugs (in pure form, not diluted street drugs) and neither of us became addicted to them.

If exposure to sugar was enough to make us all addicted to sugar, we would live in a society where everybody was addicted. It’s not the exposure that matters. It’s the thoughts we have at the time we are exposed.

Most people are addicted to thoughts and ideas that they do not realize are unhealthy for them. They hold on to those thoughts even when they suffer. Explaining to them the consequences rarely helps. They know the consequences already, because they feel them every day.

What they need to do is fill their life with content, with love, with human connection and with excitement. Then, their “drug” will not fill the empty space, because there won’t be an empty space to fill.

It is very important to note that this withdrawal must be something that people do to themselves. If you are close to someone who is “addicted”, you can’t make them go on that journey. You can only be there for them when they do. More often than not, pressure from external sources to stop the addiction, instead of support, only makes the void bigger and the addiction worse.

One of my clients used drugs for years. She was already 35 with kids of her own. Her family thought that watching her every move would force her to stop. It never did. She still uses drugs, the connection between her and her family is only getting worse and so is her use of drugs. They still threaten her and condition their relationship with her on stopping the use of the drugs.

How you would feel if your family told you that their love for you was conditioned on how much sugar you consumed?

Addiction is an escape to a comfort zone that, over time, becomes our prison.

Getting rid of addiction is a self-development process. SELF development! There is no other way. We can help, but we can’t force. Forcing only increases the addiction.

Here is a list of thoughts people are addicted to and though they suffer from it, they aim to consume it more.

“I need approval to survive”

No you don’t! Approval is a drug and our parents are the drug dealers. The faster you get rid of this belief, the sooner you will be free!

“Life should be easy”

No it doesn’t! There is huge victory feeling when we conquer something. My work is not easy but I love every second of it. Being pregnant or giving birth was not easy but I would never replace it for the world.

“I am not enough”

By who’s standards? Enough does not exist. You always do the best you can with what you have, which makes your choices the best choices and the only choices you could have made with the beliefs, circumstances, feelings at that moment. Let it go, whenever this thought comes into your mind, examine it. Who gave it to you? It was usually a way to control you by external standards. You are free to live up according to your standards.

“My past determines my future”

No it won’t! I was a very sick girl. Does it mean I will be a sick girl in the future? No! On the contrary! I was a sick girl and I am a very healthy girl (oh, well, women) now. My past was just a series of events that happened to me before now, I take what I need to take and move on. You do too, even if you don’t think so. We have a sophisticated mechanism in our body that learns and improves all the time. We just need to trust it to do the job.

No, it won’t! In fact, it is the opposite, it will plant this thought in your mind in a filter in the brain called RAS (reticular activating system) and will start a self-fulfilling prophecy that will reinforce this and make it happen exactly the way you rehearsed it in your head. Do not confuse considering obstacles before hand to living the obstacles until they become your reality.

“If I want something enough, it will happen”

No, it won’t! Because enough does not exist, never did. Will power is something that we don’t really understand. Most people believe that they don’t get what they want because they don’t want it enough; therefore, something is wrong with them. Nothing is wrong with you! Will is not a standalone mechanism. It involves so many adjustments that simplifying it is only self-torture.

Of course you are! Just to read this post you need to be alive, breath, able to read, have electricity, computer… Luck is an invention of unsuccessful people to justify their failure. If you look at others and say, “They are lucky” you are undermining their effort. Luck is the ability to act on a favorable chance. Those you consider lucky, took the chance, it didn’t fall from the sky. When you talk real luck, think of being born with in a place there is no food or water…

These are just some thoughts that people are addicted to. Those thoughts are a prison only because those who hold them think that the outside world without this belief is not safe. If you are addicted to substance, or a thought, I am stretching my arm to you with love. The world here, on my side, without them, is beautiful. Join me in enjoying this life.

100 Things I Want People to Think of Me

Generally, I think we need to live our life based on our own judgment by developing a sense of self that functions as a moral GPS (or compass), and not by other's judgment or external rules and beliefs. In life coaching, the task of finding who we are relies on…