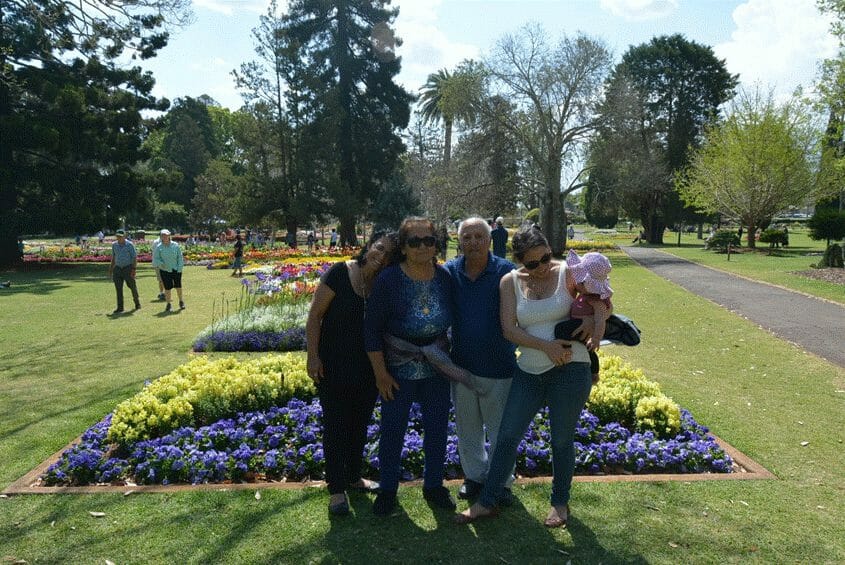 From Point A to Point B

She was confused and could not find things she just put down a second ago. At one stage, she was teary after she couldn’t find something in her bag. I told her it must be the flight and after a good sleep, she would feel better. She said, “No, this has been happening to me for a long time”.

She asked for 10 bed sheets and said she got up 4 times a night to change all her clothes and bedsheets, because she sweat so much. She felt shame and that was the reason she never wanted to stay overnight when she visited people.

She had pain all the time and could not stand on her feet for more than 2-3 minutes. He back hurt so badly that she walked with her back bent, and she hated it, because one of her aunts had walked like that and she was afraid to be like her.

When my dad told stories, she said, “I don’t think I’ve ever heard this”. She could not lift a bottle of water to drink, because her shoulder was in enormous pain and one litter was too heavy for her. Lifting her great-granddaughter was out of the question, which made her very frustrated, because she loves babies and babies love her.

Her blood sugar was high, and she checked it every morning and took tablets to balance it. She claimed she was gluten-intolerant and had been on a gluten-free diet for 6 months, but nothing had changed.

When we watched a movie with subtitles, so that she could read, she said she wanted to sleep. I thought she could not read them. This was strange, because at home, she did nothing but watch TV, and that made me realize that was the reason she preferred “reality” shows.

She talked about everything she ate as being good or bad for her. Taste was not a reason to eat. She was still overweight. Her face looked darker and more wrinkled than ever and she hardly smiled.

My mom had dentures and they were not straight, so they did not fit into her mouth properly. She wanted to cook, but couldn’t lift things or stand up for long, so someone had to be next to her and do what she told them to do.

She took sleeping pills and still woke up 4 times a night. At home, she sat in front of the TV screen until midnight, sometimes later. She went to sleep with the radio on, listening to some talk show about all the horrible things in the world, which went on for 2-3 hours. She woke up at 10am, more tired than when she had gone to bed.

This meant she had breakfast around 11am and dinner at 10pm, sometimes later. She took several pain killers at once and the doctors had increased her dosage gradually, because they didn’t relieve her pain. The latest ones were Lyrica and Fentanyl (Fenta) patches. I discovered that Fenta was synthetic Heroin, 81 times stronger than street Heroin, and I realized my mom was a drug addict!

She got Fenta as patches that lasted 72 hours. Each patch started working after 6-8 hours and lasted for 6-8 hours. 24 hours before she was supposed to take the next patch, she started asking my dad if it was time yet, because she was in big pain. I urge you to look at the side effects of these two drugs, because when I read them, I was scared for her life.

My mother’s body was in total chaos (prescribed by her doctors). This was the starting point of our journey.

One very successful strategy in healing is to give the patient a model of what is happening to them and what to expect. The patient, who is not medically trained, can understand herself better and can relate to the model whenever her feeling changes.

This strategy is also useful for emotional healing and I use this strategy with all my clients. One great model that has worked well for many of them was “the pharmacist”.

Some things in our life disturb the function of the pharmacist:

My mom’s pharmacist had retired completely! She had been taking so many pain killers for the previous 13 years, and she had been so stressed for such a long time, that it disturbed her sleep and started a seriously vicious cycle. No wonder she was heading for the grave.

Awaken the pharmacist within

If the pain is always 100 on a scale of 1-100, the pharmacist doesn’t know what to do and just gives us. But if the pain is sometimes 10, sometimes 70 and sometimes 95, he compounds something different for every level.

We also need to stop taking the external substances, but initially, it was impossible to stop her pain killers. So, I made my mom a checklist and every day, she rated her pain and wrote what she ate, what time she went to bed, how many times she woke up at night and how much she moved. At some point, I realized she was still confused and changed the rating scale to 1-10.

When she was ready, I took my mom to see John the Wizard. Come back next week and I’ll tell you about it.

How to Simplify Your Life and Reduce Stress and Overwhelm

Life seems to be stressful and overwhelming to most people. The more we are on "automatic pilot", the more we feel out of control. When people are stressed, they think life is very complicated, so it is easy to see that simplifying life can reduce stress and overwhelm. All around…