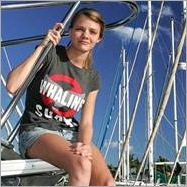 In case you have not heard, Jessica Watson is a 17-year-old girl from Australia who has recently sailed around the world in a 10m (30′) boat (a sloop). This is by all means an outstanding feat and can be deemed very inspiring for young people all around the world.

Now, we live in Brisbane and Jessica lives about an hour’s drive away, so I got a glimpse of her in TV and radio news, all of which sounded very exciting (“Jessica Watson, the Australian teenager sailing solo around the world…”) and, well, newsworthy.

But people always think about themselves and, being a person of the parenting persuasion, I tried to put myself in her parents’ shoes and consider what I would do if Eden wanted to sail around the world in a little boat like that.

I was absolutely horrified (see Taken for how I felt when Eden was abroad on her own).

The chances of something going terribly wrong in the middle of the ocean are so big I would never let any of my offspring do it. Losing them would just be too much for me, especially with the thought I could have stopped them.

But Jessica Watson’s parents feel differently. They encouraged her on her way, supported her during preparations and all through her voyage and appeared alongside her on the news.

They did not even pull the plug when she hit a 63,000-ton freighter at 2am, while she was asleep. She had checked her radar and failed to see the enormous ship, which had no time to avoid her, and her mast was smashed, forcing her to return to shore by motor. 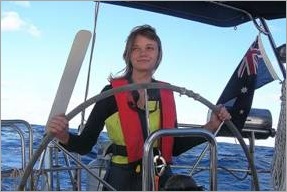 Just close your eyes for a minute and pictures this: your boy or girl asleep in small sail boat, rocking on large waves in the middle of the ocean. Everything outside is pitch black. All of a sudden, a huge metal body glides into the frame and hits your child’s little boat like it was nothing, threatening to capsize it with its wake.

Now, I do not know the Watsons and what I am about to write may be completely unrelated to them or their original intention, but Jessica has received some serious sponsorships, starting with her boat (named “Ella’s Pink Lady” after pampering and cosmetics company Ella Baché), various marine equipment vendors, a global media network and many others. She now sells merchandise, event tickets and posters on her website, which has seen a huge jump in traffic since her safe return.

Not surprisingly, she will even be writing a book.

Well, the way I see it (and you can quote me on this)

Only the outcomes separate the brave from the reckless

Jessica Watson’s solo journey around the world is inspiring. There is no doubt about it. She had prepared well for it – took courses, invested in equipment, got help from people with experience, planned and practiced. That was good too. According to The Los Angeles Times, she said, “I wanted to challenge myself and achieve something to be proud of. And yes, I wanted to inspire people”. Very positive and noble indeed.

But if, instead of hitting that freighter during the “test run”, she had hit it during her “live run” and a bit harder, everything would be so very different. Mostly, things would be different for her parents. 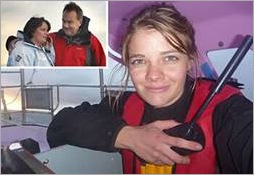 My conversation with Eden would probably have gone something like this:

Eden: Dad, I want to sail solo around the world.

I am so happy my kids are alive I do my best every day to keep it that way.

Sure, my kids still go to school and ride the bus. They still go to parties, play sports, dance and (gulp) drive. Eden has even had a couple of road accidents as a new driver, but she had one of them within walking distance from our house and was able to drive home from the second.

How on Earth would I help her in the middle of the ocean?

What would you do?