A couple of weeks ago, there was a special event at Southbank, the park along the Brisbane River. Among other things, there was a large enclosure, where an organization called Medecins Sans Frontieres (Doctors Without Borders) showed a model of a refugee camp and took groups of people on guided tours. The line before the gate of the model refugee camp was very long, but we decided to wait.

In the meantime, we read the material that was posted along the “camp” fence and looked at the pictures of displaced people from all around the world, disasters and kind people caring for the sick and hungry. Despite the need to wait, our kids were patient and asked questions about what they read.

After about 30 minutes, we finally stepped into the “camp” and met our guide, a nurse, who had been on 2 missions with MSF and was going to give us a taste of what it was like to be a refugee. At first, it all seemed very romantic, as if we were going to watch it on a screen, but our guide soon changed that.

“Imagine that you are living in a small village somewhere and working the land for food. You live in a small mud or galvanized metal hut and your life is simple but OK”, she said, “Then, one day, a war breaks out in your area, and your kind of people is singled out as undesirable. Hoards of armed people storm your village, burn the houses, take whatever they can, hurt and even kill people, and now you have nowhere to live, nothing to eat and you are very, very afraid for your life. What’s the first thing you do?” 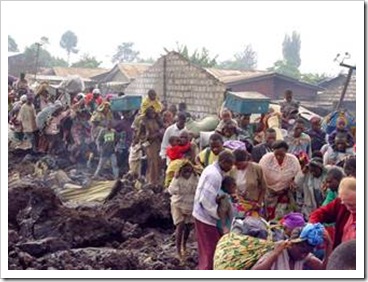 We were shocked. Nothing like this had ever happened to anyone in our group and such a thing was hard for us to imagine. With our guide’s help, we realized that the best thing to do was to get as far away from danger as possible, while hiding from potential enemies, and seek a safe place.

“And often, that place is as far as the border of your country, which can be very far away, especially since you are now walking and carrying everything you managed to take, and sometimes your kids, on your back or head”, said our guide.

She ushered us towards our first stop, showing a few rough tents with plain mats on the floor, and asked, “After running away from your home and walking through danger for maybe a few weeks, what would you look for first?”

It was shelter. Each tent was used by up to 10 people, who practically slept on the floor. Our guide showed us toy cars made from drink cans and little dolls made from plastic bottles. “I just love refugee kids”, said our guide, “Regardless of the conditions they are in, they are still kids and they are incredibly creative in making toys and playing games”.

The next thing we would need as refugees is (no, not food) clean water. Human beings can last a lot longer without food than without water, and the main problem for refugees is that most of the water they come across is not suitable for drinking and can make them sick. “See this?” said our nurse without borders, “This is a 25 liter container, which lasts each refugee for a day. By comparison, the average Australian person uses 300 liters of water a day and during the recent water restrictions, people complained they could not wash their cars…”

We then learned that it was the job of young teenage girls to carry the water from the filling station to their families, which sometimes takes a few hours. Most of them carry the water on their heads. We tried to lift some of the containers and quickly got an idea of just how heavy they were. 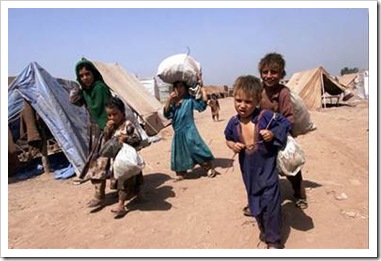 Our next stop was the food distribution tent, where refugees would get a mixture of flour, protein and vitamins. The mothers typically come and get a whole week’s rations for their entire family, using a special card, which they must guard with their life. The daily amount of food per person is roughly equal to a single plate, yet nobody says, “What? Staple food again? I’m not eating this!”

When you have thousands of people living close together in poor sanitary condition, disease quickly becomes a major concern. Our nurse guide told us she had vaccinated more than 1,000 people per day for 6 days straight to prevent an outbreak and showed us the special tricks and equipment that made such an achievement possible.

All this time, our kids were captivated by the descriptions, the stories, the pictures and the actual tools and equipment they saw. They asked questions and were upset by some of the answers. Some time before, they had met a refugee, who had told them about his hardships, but this experience was as close as they had ever gotten to actually being in a refugee camp.

We left the Medecins Sans Frontieres “refugee camp” feeling very compassionate towards those who have been displaced from their home and country. We felt angry at those who start wars and discriminate groups of people, creating problems and spreading bad energy in the world. We also developed great appreciation for the people of this organization, who give up several months of their life to save many people. Finally, we became very happy that we were fortunate enough to be able to choose where we wanted to live and to be able to find a peaceful, organized place to call home, where the closest thing to a war is a major football game.