Being grownups, parents are often busy with grownup things. Being kids, parents often assume their children are busy with kid things. So when something happens that we classify as “a grownup thing”, we may assume our kids will simply ignore it or perhaps not fully comprehend it. Sometimes, we are so wrong.

If you have read some of my earlier posts, you know how much I admire my youngest daughter Noff. She is only 7 years old, but what an amazing child! Not a week goes by that I cannot find something great to learn from this girl. Sometimes, she does things that just blow me away.

A few weeks ago, my oldest daughter Eden had an accident. This happened in the evening, when the younger kids were wrapping up their day on their way to bed. She came through the door at the same time she had always returned from her piano lesson, but then she just stood there very quietly.

Ronit and I came to greet her and noticed she was looking limp and pale and not saying much, so we asked her if something had happened. She quietly stated the facts of her accident, continuing just to stand there.

“Are you alright?” we asked. 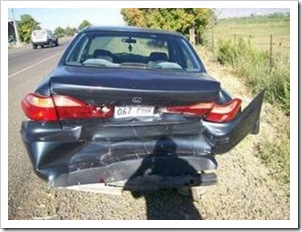 We hugged her and told her we were happy she was unhurt, keeping in mind to get her examined the next day, and tried to reassure her the car was insured and the worst-case scenario (total loss) was actually a welcome outcome for us, because we did not think we could sell it otherwise when its time came.

[Are you noticing the grownup thinking? OK, just making sure]

Then, we went outside to look at the car, which Eden had managed to drive back home. It was seriously leaking oil and the front was dented to the point where engine damage was almost certain and our assessment of repair costs were such that the insurance would have to pay for the whole car, rather than fixing it.

In all this time, we paid no attention to the kids. So little attention did we pay them, I do not remember them being involved in all of this. In fact, I have no idea where they were at the time. It was a grownup thing, anyway.

Yet, the next day, Noff came up to Eden and gave her this: 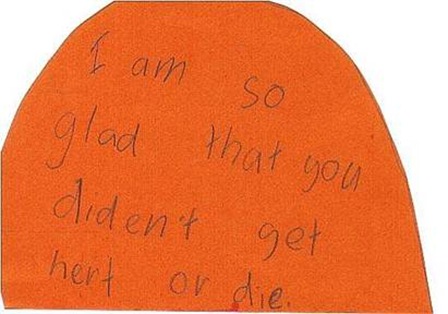 In the following days, I noticed all of a sudden how attentive Noff actually was. She followed her older brother and sister around, sang “their” songs with them (mumbling some of the words to keep up), doing “their” moves when they danced and laughing at “their” jokes and humorous put-downs.

I noticed she had completed a Word document for her oral presentation in class, complete with text, formatting and images she downloaded off the Internet.

I noticed that over time, Noff had developed a collection of Internet games she was playing like a pro. In moments of sudden silence, I find her sitting in front of “the kids’ computer”, earphones on her head, looking intently at the screen, doing very well at some game and letting out a little scream of joy whenever she scores points or goes up a level. 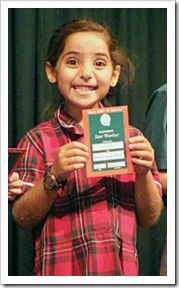 I noticed she brought drawings she had drawn at school and they showed a remarkable attention to detail – crowns, jewelry, animals, flowers, colors, body posture and facial expressions.

Now, generally speaking, I consider myself an attentive parent. Being more auditory than visual, I can tune in to what happens around me even when I am not looking. But after being hit by Noff’s worried love note for her older sister, I began to question just how much I knew about what my little girl feels and what she is capable of.

I guess this post is a wake up call to parents to stop what you are doing, take the grownup glasses off, sit quietly somewhere and spend some time really looking at and listening to your kids. You may be amazed.

Enjoy every day with your kids,
Gal