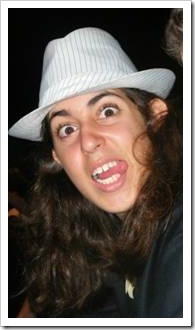 My kids want things just like other kids – they look around and want what they see. I think it only means they are normal. As a parent, you know what happens when your kids come home and say, “Mom/Dad, can you buy me …?”

It is not easy being a parent and making the decision of what to buy your kids, because kids are just young and they do not understand money and priorities, how full their wardrobe will be if we get them any shirt or pants they want or how full the house will be if we get them all the latest gadgets or toys. Kids make the decision to want or not to want things based on an urge. Sometimes the urge is internal and sometimes it is external.

Adults do exactly the same – we buy things just because we feel like it – but adults also consider the value of the object and that is not only the price but the ratio between how much we spend and how much we get out of our purchase. As a parent, I would like to teach my kids about that ratio too.

So let me tell you a story about the boy in the photo. His name is Tsoof and he is my middle son. He is 14 years old and his requests for musical instruments started at the age of 3. We were in Paris on a trip and while walking through the train station, we say people playing the violin. Tsoof was fascinated and for 11 days, he kept saying, “I want to play the violin”. We were in a transition between Singapore and Australia at the time and we knew we would be travelling for 4 months, so we said we would discuss this again when we settled in Australia.

When we left France, Tsoof stopped talking about playing the violin, so Gal and I thought this was a good way of checking whether our kids really wanted something – waiting a bit.

When he was 4 and we lived in Australia, Tsoof said he wants to play the drums. We to him, “Think about it for a while and we’ll talk about it in a month”. Well, what do you know? He nagged about it all the time and because we did not buy him a drum, he played on his stomach, on the walls and on the table. He even found spoons and sticks and played with them. So we figured he was serious and bought him his first drum – an Egyptian darbuka – and he had his first lessons at the young age of 4.

Since then, he has played his musical instruments so well and so often he now has a pair of congas, a djembe, a cowbell and a snare drum and he plays them all, as well as Eden’s keyboard.

Three years ago, Tsoof came home and said, “I want to play the guitar”. That was funny, because he had never played the guitar and we have nobody anyone around who played the guitar. Besides, Tsoof was very with music and drama and singing and dancing. We joked about it with him, saying, “When will you play, in the middle of the night?”

Finally, Gal and I said to him, “Think about it for a month and we’ll talk about it”.

Please understand that Tsoof is an expensive kid to raise. He has been doing music at and outside school for years and we invest a lot to allow him to do that. A guitar was not too expensive, but we thought he would never play it.

One day, Tsoof went with Gal to The Reject Shop and when they returned, he said, “Look, Mom, I bought myself a guitar”.

“Really?” I was a bit shocked, but he proudly showed me a simple guitar he had bought.

I thought Gal would not buy something like that. He would always aim for something more professional. “Did Dad agree to this?” I asked.

“I bought it myself”, Tsoof said to me, looking very proud of himself. 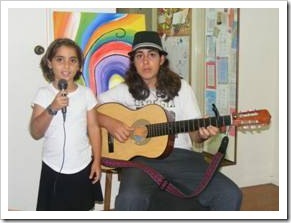 I have to say I was a bit disappointed. Tsoof was just 11 years old and had little pocket money and I thought the guitar would not even make a sound. Gal said it was a test to see how serious Tsoof was bout his guitar and that $30 is a very low price to pay for this test, which made me feel a bit better about it.

For months, Tsoof sat in front of the computer and learned to play his guitar. It is amazing how much you can learn from the Internet nowadays. He even found sites that helped him tune his guitar. How awesome is that?!

After 3-4 months, a piece inside the guitar broke and we stuck a couple of sol foam blocks to keep it from collapsing (if you look at the photo of him with his guitar, you will see the in blue and orange). We told Tsoof that if he was serious about playing (still not sure when he would find the time to do it), we would buy him a proper.

About a year later, after about 6 lessons with a guitar teacher (during school hours, but at another expense), we bought him a steel string guitar (which sounds better when he plays and sings Tribute).

Being so busy, Tsoof has found the most unusual times to play his guitar. He brings it to the table straight after we finish dinner, plays it and we sing. He plays it in the toilet. He even takes his guitar with him when he and Gal walk around the neighborhood.

In the past 4 months, Tsoof started composing guitar music and did some of it while walking outside with Gal. Last week when they went for a walk, he left his guitar at home and one of the people on the street asked him where his guitar was. So you see? We have no doubt just how serious he is about playing guitar.

Kids will always want things and we as parents would like to give them anything they want, but that is not realistic. Kids are just kids and most of the things we buy them are not used very much.

When your kids want something, ask yourself, “How many hours a week do they play with this toy?” or “How many times have they worn that unusual dress to special events?” This will show you that the usage is very low most of the time.

Sometimes, a test of their desire can help you predict how much value they will get out of it. Just ask them, “Will you pay for it from your own money?” And let them pay, just it to see if they are really serious. You can always pay them back later.

It has been 3 years since Tsoof bought his ragged, half-broken $30 guitar and he still plays it most of the time. When I listen to him singing and writing music, it amazes me every time to discover how beautiful it sounds and how much joy it can give him (and us as his family). When I ask myself how many times he uses it, the answer is 3-4 hours a week, which is a lot in his busy schedule, which sure makes it worth his investment. He passed the desire test 3 years ago and every day, after dinner, when he plays his guitar, he passes it again.

Here is a video of Tsoof showing him playing his beaten guitar for you to see that when there is a will there is a way.