Occasionally, the question “Are motorcycles worth the risk?” comes up when someone wants to buy one. It’s rather topical in our family, so I wanted to share a story for the benefit of other families having this discussion.

It was Monday morning and I had just taken my 7-year-old daughter to school. On the way back, I passed my son’s high school. As usual, the high school intersection was full of parents dropping their kids off.

I turned left after a motorcycle. A parked car started making a U-turn and hit the motorcycle! The rider flew in the air over 30 meters and his motorcycle dragged on the ground after him.

It looked like a scene from a stunt movie but this time it was real – no stunts, no practice – a young man was on the ground, next to the traffic light, surrounded by dozens of high school students who had crossed the street to go to school.

My heart was pumping, as if I was involved in the accident myself. I was the one driving behind the motorcycle and while the rider was in the air, I was screaming in my car in shock, screaming and praying. He was so high in the air he needed a miracle.

Teachers from the high school heard about the accident and rushed to help. The deputy principal arrived and asked the kids to go to school and leave the scene and I thought I would have let them stay and watch.

When I was very young, I read an article about a kid who wanted a motorcycle so much he convinced his mother to let him get his license. At that time, before the age of 18, kids needed parental consent to ride a motorcycle. 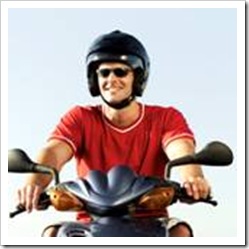 Because he was an only child, his mother refused at first, but he finally managed to get her consent to ride. One year later, he was killed in a motorcycle accident. In the article, the mother talked about the arguments she had had with him about riding safely, when in fact, her son had died because of someone else’s mistake.

So there I was, watching this young man lying on the floor and saying, “I can’t feel my legs” and I thought about his mother. I thought about that mother in the article, trapped in the cage of regret called “if only”.

A tow truck arrived first, an ambulance came after half an hour and the police arrived over an hour later. The car driver was a young man too. He was standing there, trying to make the motorcycle rider comfortable, looking pale and worried to death.

I looked around at all the high school students hurried by the deputy principal to get to their classes. People talk to them about speeding but this only makes them think it is cool to speed.

I wanted them to know that when they go to their moms and say, “But Mom, I’m a good driver”, “But I drive safely” or “But I can take care of myself” they do not know that in accidents, there is usually only one driver making a mistake, while the others just suffer the consequences.

I wanted them to understand that if the guy on the floor, not feeling his legs, had driven a car, the dent or even a totally smashed car would not hurt him that much.

Two of my sisters were involved in scooter accidents at low speed and there was no one to blame.

My nephew died while riding a motorcycle because a car driver came out of a street and could not see him. He was only 21. He was a safe driver, having been a rider in the military police for 3 years and he did not speed either. He was well known as a responsible young man. If only he drove a car instead…

My heart broke. If he had driven a car, instead of a motorcycle, it would be something that could probably be fixed with money.

Because some things cannot be fixed!