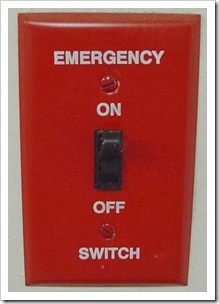 If you are like me, you often find yourself in an undesirable mental state, like panic, rage or regret. Having this strong emotion for a long time can create the wrong outcome for you, so you want to stop it, to break out of it, but how?

When I was in high school, I spent many hours reading science fiction. One of the books I still remember well was called “Man Plus” by Frederik Pohl. In the book, astronaut Roger Torraway is preparing to go to Mars, which has a very different atmosphere and pressure and requires special vision. So he is fitted, among other things, with special bionic eyes.

After the eyes are implanted in his head, he wakes up from his surgery unable to see anything. He complains to the surgeon, who then tells him his eyes are connected to the same nerves as his natural ones were and instructs him to open the bionic eyes the way he opened his eyes before.

Roger searches his brain in growing panic, until he finally finds the switch. He flicks the switch on and he can see!

I have used this analogy while going on rides at theme parks. Rides are built so that you cannot see the big dip or the steep slide ahead until you are right upon it, and then, there is nothing you can do to stop the fall. The pit of your stomach is filled with fear, which is only reinforced by the screaming people all around you. 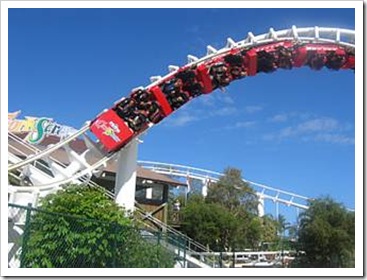 I recently went on a few rides, not having done so in a long time. As expected, whenever that horrible turn came, the knot formed in my stomach and my brain started screaming “Oh, s…”. I decided to trust the builders of the ride and remembered the people before me arriving safely at the foot of the ride and getting out with a big smile on their face. Then, although my fear did not disappear completely (those ride builders sure do a good job), it was mostly replaced by sheer enjoyment of the fall or slide, which allowed me to also pay attention to details my scared mind would have missed on the way down.

Being committed to my relationship with Ronit, I have also developed a love switch. No matter how angry I might be or how frustrated, I give myself some distance, take a few deep breaths (I exhale all the air from my chest and stomach before inhaling as much as I can) and look at her again from a neutral point of view. I ask myself, “What must she be going through to act as she has just done?”

Of course, this takes practice, but by “flicking this switch” I can now calm myself like this and imagine Ronit’s state of mind, which floods me with understanding and love towards her.

Many of our coaching clients are full of self criticism and regrets. They ask us to help them build self confidence and feel good about themselves. Knowing how damaging regret can be, Ronit and I show them how to create a new switch in their mind, the “I always do the best I can” switch.

Although this mental switch seems very useful, it too takes practice to master, but it works! After a while, our clients are able to forgive their young selves and their current selves for many things they once considered horrible and they fill with energy and a zest for life. 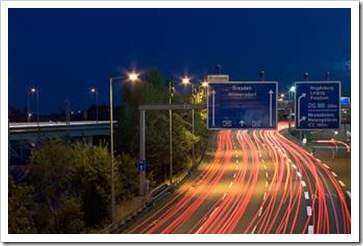 I used to be quite a competitive driver on the road. I would challenge myself to get everywhere in the shortest possible time, even when it did not really matter. Of course, this meant that other drivers were just a nuisance, because they were in my way, preventing me from achieving my driving goals.

Whenever we went somewhere as a family, I drove the car, but sometimes, I had to sit next to Ronit as she drove and I just went ballistic. “How can you drive so slowly? Quick, change lanes! You missed the light! What are you doing?!”

Sure, I noticed that when Ronit and I drive separate cars, starting at the same time and going to the same place, she somehow makes it to our destination within a very short time (usually just a few seconds), but I still did my best to arrive as quickly as I could.

While being coached, I created a mental switch from “I must get there as fast as I can” to “I prefer to relax and enjoy the ride”. Sometimes, I find myself cruising along, humming to myself, looking around and having a good time in the middle of heavy traffic. I look at the other drivers, smile at them and when I see one who is distressed, I think to myself, “Poor thing. It’s no use stressing on the road. It’s a lot more fun being relaxed and open”.

Last week, I was taking a walk with my son Tsoof and told him I was going to write about switches. To my surprise, Tsoof had a story of his own. 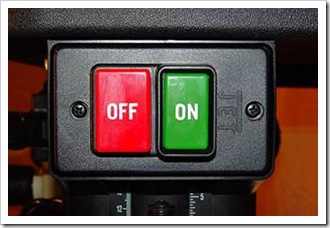 Being a highly auditory kid, Tsoof’s biggest challenge is ignoring noises and sounds. Somehow, his room seems to collect the sounds in the house and amplify them, which even I have found hard to shut out. But Tsoof told me that whenever he goes to sleep, he can decide to focus on a single thought or a single sound, like the ceiling fan or the frogs outside, and pay no attention to the rest.

“I can hear everything”, he explained to me, “But I just choose to ignore everything other than what I’m focusing on”.

Remembering that Tsoof has been meditating since he was 4 years old, I commented that this was precisely what he practices during meditation, but he said, “That’s true, but I actually read about this mind switch in Eragon“.

You learn new things every day…

Switch on the good feelings!
Gal

How Would Love Respond?

We were happy to discover that today only, Kurek Ashley is giving away an amazing package of free gifts valued in $2,000, plus 12 chances to win over $190,000 of value in additional prizes, to anyone who buys his new book. It is amazing to have so many personal development…

Ian's parents came for coaching about 5 years ago. Ian's mom, Lou, booked the sessions as a last resort before she divorced his dad. About two months ago, she sent me an email and said, "Hi Ronit, Dave and I renewed our vows last year on an overseas trip. I…