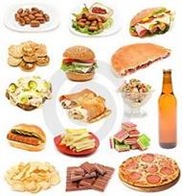 I had this conversation with a friend of mine who is a health fanatic. You may ask yourself what a “health fanatic” is and my answer is that it is someone who is very conscious about health, but so conscious it is not healthy…

I became health conscious when my daughter Eden was 18 months old and a very sick girl and only a change in our eating habits brought her breathing back to normal and made her a healthy girl again. Since then, she has hardly ever gotten sick (and she is 21 years old now).

Do not get me wrong, I think that eating healthy is beneficial. However, as a life coach, I totally reject the idea of creating fear in kids’ mind about the dangers of junk food because “we are what we eat”. Instead, I believe that “we are what we think” (about eating, among other things). I think it is more damaging to think that our food is an enemy than to eat junk food and be happy. I am not a junk-eater myself, but I think that junk food can provide something good for the soul that no healthy food can (freedom of choice, good taste, instant satisfaction, etc).

Anyway, I had this discussion with my friend and she brought up the topic to convince her three kids to eat healthy food. I think she thought that because we were a fruits-and-vegetables kind of family and I preferred healthy food I would back her up and support her argument, so she asked for my opinion. It was very hard for me to do it, but I could not tell a lie (especially not in front of my own kids) so that question backfired on her.

I am telling you this because I think that if you are not careful, you will have that conversation with your kids one day and it is better to be prepared.

She said to me, “Look around you. There are more sick people than there ever were. The food we are eating is not nutritious enough. There is too much antibiotics in meat, too much processed food and too much cancer. People are dying because of extra use of chemicals in their life. What’s your opinion?” 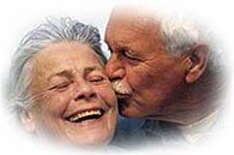 I said, “Really?! I am looking around and I’ll tell you what I see. My dad is 77 years old and he is a pretty healthy person. My mom is 71 years old and loves doctors and medication. 6 years ago, she came to visit us and we travelled around the North Island of New Zealand for 12 days. We spent most of the day on our feet and even trekked (with then 3-year-old Noff) for about 6 hours. My mom did very well and she was 65 then. My dad did even better than she did and he was 72 years old. I am looking around and what I see is that those sick people who eat junk, food that is not nutritious enough, consume too much antibiotics with their meat and gobble up cancer-inducing processed food, those people live longer”.

Before you think I am crazy, here are the facts:

I hope you see how increasing this is. 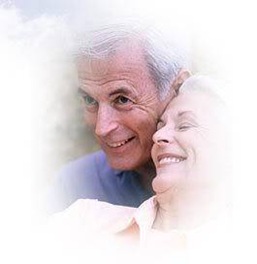 My question to my friend was, “How come when we had little or no technology, we did not pollute the air and the water, we did not ‘abuse’ the soil and take all the nutrients out of it, we lived less?”

In the past, people lived very short lives. Mothers died often while giving birth. In 1900, men lived to 48.3 years of age on average and women to 46.3. They died from a simple flu because someone sneezed next to them (penicillin was only invented/discovered in 1928) and by the age of 30, most of them had no teeth!

In 1950, only 50 years later, people could see their grandkids already, because males lived to 71.1 and women lived to 65.6. Babies still died at birth without their mothers drinking processed milk and eating at MacDonald’s and every tumor was a death sentence.

(Source: Life expectancy in the USA)

If you want a great visual representation of the changes in life expectancy (and other things) through the years, check out this interactive map (switch the X axis to “Time”, select your country and click “Play”). 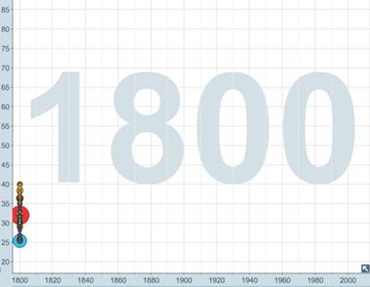 People all around the world died between 25 and 40 years old on average. 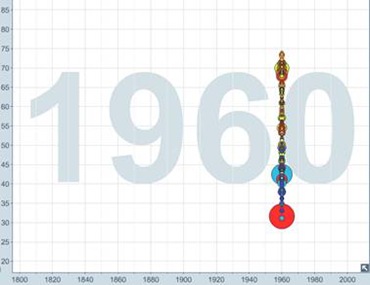 People in some countries (USA, Europe) did much better than others (Asia, Africa). 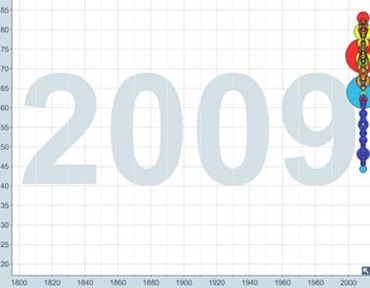 200 years ago, there were countries with less than 40 years life expectancy and now there is no country with less than 40. In fact, other than African countries and Afghanistan (mainly due to wars), the life expectancy in the world is higher than 60 year! The Chinese (the big red circle) climbed from 32 to 73 years (2.28 times the lifespan) in the past 50 years, while being exposed to junk food, fast life and Western technology.

I suggest you do not try my friend’s trick on your kids. They are computer savvy and they will you out in a flash.

I believe it is the food we eat that makes our kids strong and healthy and allows them to live long enough to go to university, learn science and technology and innovate to make food more useful to the body, so their kids will grow to be strong and healthy and smart and start studying at universities even later (maybe only when they are 40 years old) and have some life experience before they innovate and find ways to increase life expectancy even more…

I do not know about you, but I think I will go for some junk food tonight…