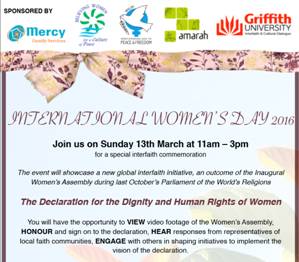 After the International Women’s Day even, I came home and read some of the statistics to my husband and my children.

Violence, child marriage, slavery and forced prostitution, rape and sexual assault, domestic brutality and abuse, “honor killing” and immolation, bodily and genital mutilation, gendercide of girls, selective abortion of female fetuses and legitimized murder are just some of the things that affect women around the world.

Seven hundred million women were children when they were married. I did not have to go far for this one. My grandmother was married in Iran at the age of 12 and had her first daughter at the age of 13.

More than one hundred and thirty three million girls and women have experienced some form of female genital mutilation.

My daughter, who is 14 years old, asked what genital mutilation was and I was ashamed to answer, not because it had to do with sex, but because I am raising her in a world where something as horrible as this happens.

More than 20,000 women a year are victims of “honor killings”, usually murdered by their father, uncle or brother. My mom, who is about 70 years old now, witnessed the honor killing of a neighbor. The girl was 13 years old and someone said she was going out with boys, which was not true. Her father and brother burned her alive by throwing her into a big fire in their back yard and her mother could not do anything, because they would have thrown her into the fire as well. It happened about 50 year ago and I thought it was over, but I was wrong.

Many women around the world cannot control their own bodies, cannot move freely, cannot buy or own property, cannot choose who to marry or to divorce, cannot have custody of their children, cannot receive education or even work outside their home.

I say we need to do something. We have to put a stop to it right now!

Although I have been doing diversity work for years and believe we must work on respect for each other, regardless of race, gender , faith, abilities and disabilities, I find that gender equality is fundamental to the health of our society.

Hilary Clinton also said that human rights are the unfinished business of the 21st century and she was right. We have daughters and sons, and we cannot allow them to live in a society that does nothing about it about the abuse of women and girls.

All religious writings tell us that teaching our kids what we believe will guarantee that it will be remembered and carried on. In the name of faith in humanity and love, I say we should regard each of those girls and women in the statistics as our daughters, mothers, sisters and friends. We should lend them a helping hand and be their voice when they are prosecuted for speaking up.

One of the speakers in the International Women’s Day event was a priest and her message was “speak up”. I thought she talked to me. She told the audience over and over again, “When you witness injustice, speak up”.

On the way home, shocked by what I had heard (and I thought I knew lots), I thought that the conspiracy to hide this information was working and I needed to fight it. So here I am, using my power as a mother, daughter, sister, partner and friend, and speaking up.

Please share the statistics with your family, your friends and your children and speak up. Remember that education is the best weapon to win this battle with these crimes against humanity.

Speak up! Stand up for women and girls everywhere!
Ronit