I was running a workshop. Over 30 people were sitting around the tables, all parents of teens who were interested in improving their relationships with their kids (oddly enough, most of the parents who come to my seminars are the ones who need them less but this is another matter).

At one stage, we reached the discussion about physical contact between parents and kids as part of the relationship. We talked about the importance of touch in people’s life, especially teens’, as they reach a phase in their life when they crave touch and can no longer get it at home.

It was a very open discussion. Parents talked about their own experiences regarding physical touch. Most were above the age of 40. They talked about living as kids in a society that had discouraged physical expressions like hugs and kisses as soon as kids became teens. Some talked about coming from cultures where fathers shook hands with their kids.

One mother said her teen did not like her hugging and kissing him, especially around others. Then, another mother, let’s call her Maggie, who was there by herself, raised her hand and asked a question:

“I understand the importance of hugs, but I find it hard to hug my daughter. What can I do?”

In groups, people need more courage to speak up, ask questions and talk about fears and obstacles, but those who gather the strength to do it, usually help others to open up.

“Thank you for sharing this with us, Maggie. When was the last time you were hugged?”, I asked her.

Maggie smiled. I think everyone in the room was answering my question in their heads.

“I’m a single mother. My last has was long time ago”, she said.

“No”, she said and tears welled in her eyes.

I, myself, was not hugged much when I grew up. I grew up in a place where babies were hugged a lot and physical touch decreased each year.

When you are not hugged as a kid, understanding the importance of touch and hugs is not enough to make you hug your kids. Having a good relationship with a partner and getting enough physical touch is like filling a tank. When your tank is full, you can easily give hugs and touch, but when your tank is empty, it can be hard.

I explained to the parents about love tanks and why changing Maggie’s ability to hug her daughter depended on her ability to fill her own tank. There was a buzz around the room. People moved in their chairs, then raised their hands and wanted to speak. 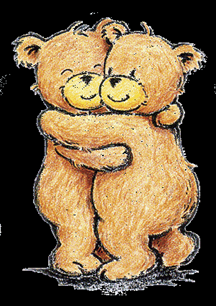 Most people responded to Maggie’s question and talked about their experiences and challenges, this time as human beings, not parents. Some people had wonderful ideas for her to fill her love tank. It seemed like they were helping Maggie, but the faces around the table showed they were helping everyone.

Every coach, in every coaching session, is in constant search for the one thing that would help change the client’s life. I learned this technique from my professor in the “Creative Thinking” project I took part in 22 years ago.

If the students discover the learning (they have an “aha moment”), it means heaps more than when the teacher is teaches it to them. Similarly, when participants help each other find the answer, it is better than when the facilitator says it…

I thanked Maggie very much for allowing this thing to happen.

At the end of the evening, a big group of parents stood at the door and hugged each other. That day, they all went home with their love tanks full to the brim.

Although you need physical hugs, I am sending you the closest thing I can on the computer. Please pass my hugs on to anyone who may need to fill their love tank.

This week, my 9-year-old daughter Noff went to a play day with 4 of her friends. The parents who came to pick them up also had a bit of "play" time socializing and having a nice pizza and some watermelon. The discussion was about kids, Santa Clause and fairies. We…