Does it ever happen to you that a movie you have seen keeps occupying your mind long after you have watched it?

It happened to me last week after I watched Water, a movie about widows in India. It was such a hard movie to watch. Hard but real. So real it was painful.

In the movie, set in India 60 years a go, a 7 year-old girl’s husband dies, making her a widow. She is brought by her father into a “widow house” to live with a group of widows who live as outcasts until death will set them free.

According to their tradition, a wife is half the soul of her husband, so when he dies, she has three choices: to be burned with her husband, to marry his younger brother, or to live in a temple a life of poverty and discrimination until the day she dies.

The movie focuses on five widows: the head of the temple (the brute), the spiritual leader of the temple, a beautiful young woman (who works as a prostitute for the benefit of the temple), an old widow and the 7 year-old girl (who questions everything). Through them, their culture is put to trial. Through their story, 2000 years of religious ceremonies are put to the test and fail.

The little girl in the movie is the agent of change. Her naivety raises many questions and creates doubt in a strong an prevalent tradition. 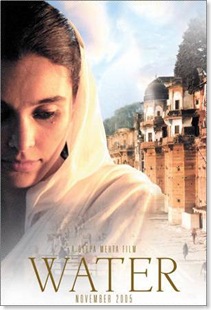 Do you follow your cultural beliefs or follow your conscience? This is the the movie’s question for the audience.

Throughout the entire movie, feeling shocked, I wondered why things were so.

Why did the families bring the girls there without any doubt? Some of them were brought there when they were very young girls. Just the thought of my own 6 year-old daughter leaving home to live away from me gives me the shivers.

Why did their families never come to visit? Throughout the movie, no one came to visit them except a pimp who supervised the pretty young woman.

Why did they have to beg for food? In the movie, a beautiful girl, who was brought to the temple when she was just 9 years old, was forced to become a prostitute in order to feed the whole temple.

There were so many “whys” and the more I thought about it, the more I realised that we are all the same, trapped in traditions and beliefs from the past. Yes, the movie brought the question of strong cultural beliefs to our attention in a cruel way, but are we different when we treat most of the things in our life with acceptance and never question their validity?

Think of most religious beliefs. Are they up to date? I am sure they had a good reason to having them 1,000 years ago, but do they suit our life now?

Think of the place where you live. Are you there because you chose to be there, or are you there just because it is easier not to change?

The movie ended with some relief when the conscientious leader of the temple sets the little girl free and finds the answer to her conflict between her conscience and her cultural beliefs.

But then the message at the end stated that in 2001 there were 34,000,000 widows in India, following the tradition that was introduced 2000 years ago.

I am going to write it again: 34 million women living in shelters away from their families regardless of age and regardless of status.

I talk a lot about our need to set our own rules and own beliefs regarding life, rules of love and sharing, love and caring, tolerance and steady progress and after watching this movie, I wonder how many more of our traditions are so engraved that just like the women in the movie, we do not have the strength to doubt.

If you need a reminder of the importance of questioning and updating your moral compass in life, watch the movie Water.