On Monday, I told you about Donna, a teacher who deliberately took a group of 10-year-olds to a funeral. It was a funeral I think everyone should participate in. I told you that story because two of my clients who are teachers had told me they had held such funerals with their classes.

One of these teachers went through every part of my life coaching program, became a counselor and is now doing her PhD in mental health. And, just like me, she sees teaching as a mission.

I coach many people and every person responds differently and takes different things from their experience. So why did Tanya choose to have a funeral with her students?

About two years ago, we worked on finding her direction in life and taking full control over her thoughts. Tanya told me she had lots of negative, judgmental thoughts and was full of regrets.

We tried to eliminate those thoughts for a while, but that was not very successful, so I asked her to write them down. She told me she was afraid someone would read them. She wanted to get rid of the thoughts without being exposed. We talked about that and came up with a solution: she would write her “bad” thoughts in a foreign language. So she did that.

One evening, when Tanya came for a session, we sat on my balcony and I put a big empty can on the table.

“A funeral?” she asked, very surprised.

“Yes, a funeral. It’s a good funeral, though”, I said, trying to sound positive.

“No one yet”, I smiled knowingly.

“Who are we going to kill, then?” Tanya asked.

“The demons in your mind”, I said and lit a fire inside the can. 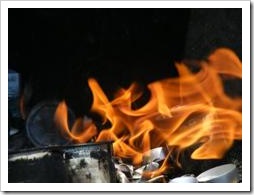 “Cool!” she said, holding her coaching folder in one hand and her “bad thought” notes in the other. She set them on the table and realized what we were going to do.

“Oh, I get it”, she said with the sound of excitement in her voice, “We’re going to cremate my bad thoughts, aren’t we?”

We spent the next hour or so throwing the bad thoughts that were written on her notes into the fire inside the can. It looked beautiful.

Tanya had great fun burning her notes. She tore some of them into little pieces and put each one into the can separately. She told me about some of the thoughts she was getting rid of, but said she did not want to hear herself repeating most of them and just cast them into the fire without a word.

We never bothered to spread the ashes.

You see, whereas most funerals are unplanned, this one can be done even if you do not have a garden patch at the far corner of your house. And feel free to bury (or burn) anything you like (actually, anything you do not like)!