As we express our gratitude, we must never forget that the highest appreciation is not to utter words, but to live by them.

Sometimes, the appreciation of what we have in life is the only thing we need in order to paint our life in bright colours. It is as if the greatest way to overcome stress and distress or to stop taking life for granted is to look at our life and notice all the good stuff.

As part of the Be Happy in LIFE mission, we dedicate much of our time to learn and teach happiness and, let me tell you, some of the lessons are amazing and strong, much like the one I want to share with you here.

Last year, we took on the streets of Brisbane to hug people and spread the message of “12 hugs a day”. It was a great personal growth experience for us and for all the hundreds of people we hugged in our FREE Hugs campaign. We went there to give free hugs and we never expected to receive so much from this journey.

A few months ago, we were contacted by the Brisbane City Council to take part in an event for homeless people at Brisbane City Hall . We were asked to stretch our arms and hug people who were less fortunate at a special event to help homeless people reconnect with society. The woman who organised this event, called Homeless Connect, was thrilled when we said we‘d be happy to take part.

It was a weekday. Many volunteers, dressed in event T-shirts, filled the halls. We were advised to come around 11:30 “After they take a shower”.

Over 500 homeless people went into the different sections of the building to use the various services that had been organised for them. Each one was escorted by a volunteer to the doctor’s room, the showers, the hairdresser, the food and coffee area, the clothing “shop”, the book area, the job placement desk, the legal aid desk and to the many other organisations that were there to help them. 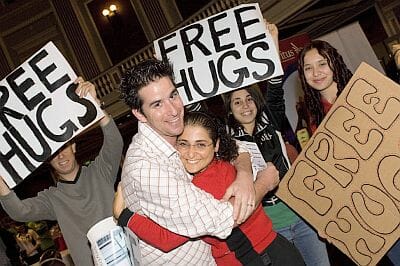 Three of us – Eden, Gal and I – stood there, holding signs saying “FREE Hugs”. A young student named Lina joined us too, to our surprise. We hoped that the homeless people, who probably needed touch more than anybody else, would come and get a hug from us, even if there was no point talking to them about getting 12 hugs a day.

At first, only the volunteers came for a hug, while many others watched and waited. Slowly, people came closer. You see, people who do not have a home, who live on the street or at friends’ houses, don’t get many hugs.

The sad part was that they didn’t think they deserved to be hugged. Many of them looked at us surprised, as if asking “Do you really want to hug me?!” But the volunteers, who escorted them, encouraged them to come and receive a hug.

They were no simple hugs. They were longer hugs. The homeless people came hesitating, not sure if they were giving or receiving. They held us tight and stood there for a long time, some with tears in their eyes, saying “Thank you, Thank you!”

Then, they looked at us and walked backwards with a grateful smile. Some followed us wherever we went and others brought their friends. “He is shy, he really wants a hug”, they said and used the opportunity to get another hug for themselves.

One elderly man stood next to us and said, “This is a wonderful thing. You’ve made my day.” Brave ones asked if they could get another one.

Many volunteers said to us, “It is wonderful to have you here” and we felt great to make a difference to so many homeless people, but when I looked around I realized I was there for me more than for them. I only had to look.

A pregnant 15- or 16-year-old girl came to us for a hug. Old people were standing next to the bookstall, picking a book to read, and the clothing area was full of warm clothes and people holding many bags full of socks and blankets. The food area was full of people and next to the doctor’s room was a young woman with a baby and I couldn’t stop thinking about the electric blankets I had bought for the kids recently and felt bad about it.

A skinny young homeless girl stood next to us. “What are you doing?” she asked and Eden and Lina told her we were there to hug everyone who wished to receive a hug. She smiled. “Can I stand here with you?” she asked and they both said “Sure! Come, hold a sign”.

She stood there, giggling, while people came and hugged her. She looked at us, proud and surprised. “They hugged me!” she said excitedly. After 10 minutes, she asked to take the sign and walk around with it and off she went.

I looked at Lina and Eden. They were the same age as the homeless girl with the sign. Lina’s mom sat on one of the chairs, waiting for her daughter, while she was hugging homeless people. I hoped she was proud, proud as a peacock.

I realized that while I was there to give, I received one big lesson in life. If things happen for a reason, then the reason I was there was to appreciate what I have and I only had to look around to realize how much I had.

I looked at my daughter, feeling fortunate she was willing to give her afternoon to hug strange homeless people. Just 18 years old and already has the gift of gratitude and the understanding that when you give you receive.

We left City Hall at 1:30. The young girl was still standing there with our sign, giving hugs to people walking by. I looked at the hall, full of volunteers and homeless people. I was honored to have taken part in this event.

I had given over 200 hundred hugs that day (pity they couldn’t save a few for rainy days), but received much more. I said, “Thank you!” and went home .

As you read this blog on your quest for happy life, look around you. See the walls, the ceiling, your bed, your clothes, remember your last hot shower, your Internet connection and all the other things you are so used to seeing every day. Aren’t you lucky to have them?

May the Force be with you,
Ronit