We went to sleep late at night in our room at the guesthouse in Thailand. The street was full of tourists and we wondered how on Earth we were going to wake up at 4:30am to prepare for our flight back home. We could set our hand watches, but I knew that my internal clock would do the job. I only needed to look at my watch before I closed my eyes, see the time and tell myself to wake up on time.

We asked the nice guy at Reception if he could wake us up. We were unsure how this would work since there were no telephones in the room. He smiled in understanding (no wonder they call Thailand “The land of smiles”) and wrote on a 2-centimeter piece of scrap paper the room number in beautiful “ants” handwriting (I so love the Thai font) and next to it, he added “4:30”. I knew I had to use my internal timer.

We organized everything, took a shower and went to bed, reminding one another to remember the laptop that was in the safe downstairs, next to Reception. We counted bags and had a sleepless night full of excitement – the mattress was too hard, the pillows were too high and too heavy and we were still jet-lagged, so we turned over in bed for hours. Only Noff, our 7-year-old, slept the whole night ignoring our talks, the door opening and the light.

Finally, 20 minutes after we fell asleep at 4am, the guy from Reception knocked on the door and waited for us to open the door before going back downstairs. Half asleep, we smiled at him and thanked him for remembering his 2-centimeter piece of scrap paper. We felt like we were back in the past, when phones, computers and other automatic devices had not been invented and a simple knock on the door did the job.

When we had arrived in Thailand, two days earlier, we had asked the taxi driver who brought us from the airport if he would pick us up for our departure. He had promised that he would come at 5am sharp.

It took us a while to get ready with all our huge bags at the front, and then we stood there waiting (praying) for the taxi driver to arrive. Tsoof asked what we would do if he did not come, but I did not even want to think about it. The taxi driver had not even left us his phone number. Our arrangement was just based on trust. “He’ll come”, I said (the thought he might not come was too scary for me to handle at 5 in the morning after two nights of meditating because I could not sleep).

Gal took the laptop out of the safe. We finished all the paperwork with our human alarm clock at the counter. The taxi driver appeared, waiving and smiling, and helped us with the big suitcases.

5am was still dark in Bangkok, the roads were empty and our driver got us into the airport in half the time (for all of you who have never been in Thailand – traffic can be the difference between making and missing your flight). We were very happy to have some extra time for hot chocolate (no matter how hot it is outside, airports are always cold).

So who needs technology with all those wonderful people around?

The queue was so long we thought we might not have time for hot chocolate after all. 15 minutes into the queue, Gal took the passports out of his pouch and asked, “Where are the flight tickets?”

We looked at each other, trying to remember where the red cover with our tickets was. “Didn’t you put them in the laptop bag?”, I asked.

The kids looked very confused. “We’ll be fine, there are always solutions”, we said to them (trying to encourage ourselves), “We can always turn on the laptop and show them the copies we saved three months ago”.

“Welcome”, said the smiling girl at the counter.

Gal gave her the passports and she waiting for the tickets.

“Errr… we can’t find the tickets. We think we have forgotten them at our guesthouse,” Gal said, embarrassed. 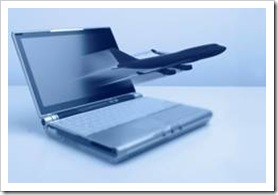 She smiled and said, “That’s OK, I can find you in the system”, and she did.

We loaded the bags on the scales. There were 4 big (too big) suitcases (1 per person and we were 4). The scales at my parents’ home were pessimistic.

“Would you like to send another bag?” she asked, still smiling. We were happy and relieved and even checked in one of the carry bags with the new things we had bought on our last day in Bangkok.

3 minutes later, she gave us our boarding passes, told us the boarding time and the gate number, all with a big smile on her face.

At 8am, the captain greeted us on board and asked us to fasten our seatbelts…